When Damian Lillard signed his first NBA contract in 2012, he locked in a $13.8 million deal. The basketball player’s next step was an easy one. He headed straight to his mom and told her she could finally turn in her notice.

“I’m a millionaire now so I went to my mom’s job and was like, ‘Quit,’” Lillard told Andscape‘s Marc J. Spears in an interview this week. “I literally went and helped her pack up her desk, everything. ‘They ain’t been doing you right. They’ve been on your ass about every little thing. We ain’t coming back.’ So that was kind of just my initial thought.”

That moment, he said, was “one of the best feelings” he’s ever had. His mom was so unhappy at work. She was suffering from health problems, under a great deal of stress and her job security always seemed at risk. The two went into her office together and he helped her tell everyone that she was leaving.

It was a life-changing moment for his mom. In 2014, she opened up to NBC Sports about how her son’s financial security has made a world of difference. Not only did she get to leave a job that was making her unhappy but she was able to get the medical treatment that she needed.

“I love the fact that I don’t have to work no more,” Gina said. “I just take the kids to school and handle the bills. I love having my family all together. I am truly a blessed individual.” 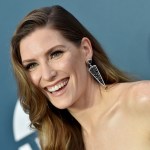 Lillard continues to show his mom so much love, taking to social media this past Mother’s Day to share some sweet words about the woman who raised him.

“There’s nothing like a mother’s love. I’m thankful to have been raised by the GOAT (@sugagee ) and to be married to another!” the basketball star wrote. “Happy Mother’s Day to all the mothers out here doin the job daily even when it’s alone and breaking you down! We love and appreciate you. I hope you get drowned in love and attention today! ❤️🙏🏽🎁♾”

These history-making Black moms were (and are!) paving the way for women everywhere.