Sometimes, grandma can’t help it. Despite their best intentions, they just don’t know what to gift their grandkids. I don’t blame them — I can’t even shop for Christmas presents for my own kids until they’ve made a wishlist. But one grandma went several steps too far with her gift for her 6-year-old granddaughter, and Reddit is gaping at the sheer audacity!

In the “Parenting” subreddit, a mom complained about her real boob of a mom. For some reason, instead of shopping for Barbies or L.O.L. Dolls or a good old fashioned, out of style sweater that the little girl can pretend to like every time her grandma comes over, this woman bought her granddaughter training bras. As in, actual underwear for her non-existent breasts training bras! Obviously, this woman did not ask her daughter what her granddaughter might like.

“My mother bought training bras for my SIX year old daughter am I being irrational here?” the OP wrote in the title, adding. “This is a mixture of a rant, and asking you guys if I’m basically being a jerk here. Basically what the title says, my mom bought my daughter training bras and is upset that I’m not having her wear them and has been arguing with me about it ever since.”

She not only bought the training bras — again, for a 6-year-old! — but she’s also calling for status updates on the gift and is upset that she isn’t wearing them? This is super, super strange behavior. For starters, why does this grandma care? Secondly, how does she possibly think it’s her responsibility to give this gift and insist on something like this?

The OP explains more. “When she first bought them and showed them to me, I was immediately not okay with it, but my daughter was in the room and I didn’t want to sour the mood so I didn’t say anything,” she said. Talk about awkward! Shopping for a first bra is supposed to be a fun, if not slightly embarrassing activity between a mom and her pre-teen daughter — not something sprung upon you and your young daughter at a surprising moment. This mom deserves an award for her restraint, so as not to do anything to scare or traumatize her daughter. After all, she may wear training bras later, so the mom doesn’t want to make too big of a deal in front of her.

But the grandma just can’t let it go. (Why is she so obsessed with this?) “My mom left, (she lives in another state) and almost every phone call she asks about her wearing the bras,” the OP continued, which is absolutely wild. How is someone else’s puberty journey any of your damn business? Stay in your own lane, ma’am! 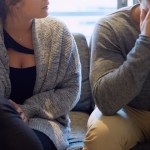 This Bride-to-Be's Fiancé Is Waving Major Red Flags Involving His Children vs. Her Children, & Reddit Is Cautioning Her to Rethink Their Nuptials

“I told her no and that she is far too young, and it ends in an argument every time,” the mom continued. “In my opinion, she should enjoy being a child. As a woman myself, BRAS SUCK. Why should she have to wear one any longer than she should?”

Amen, sister! Let her be a kid.

“But my moms opinion is she’s going to have to eventually anyways, and she actually likes the bras so why not just have her wear them?” she continued, clarifying, “My daughter doesn’t like the bras btw, she’s just okay about it.”

Ending the rant, the mom said, “I’m just so aggravated here and I’m freaking mindblown that my mom thought training bras for a 6 year old was a good present.”

Redditors are too, and absolutely roasted this overbearing grandma.

“Can you maybe get your mom some ‘training adult diapers’ so she can start practicing for when she’ll need them?” one person wrote, and I almost peed my pants laughing so hard. Seriously though — nobody needs practice underwear. When the little girl needs a training bra, she’ll get one, end of story.

“It’s weird to me she’s so invested in your child’s underwear,” someone else wrote. “I would simply say, ‘I don’t want to discuss her underwear.’ I would also make a rule that parents (and eventually your daughter) are the only ones who buy it, so it’s a non issue.”

The OP responded to this comment, writing, “In all honesty, my mom was always very invested in me and my sisters bodies as we were growing up.”

She continued, “My sister and her were both ‘early bloomers”’(had double ds at 12) And I was the opposite. I got my dads stick figure, and didn’t even start developing until 14-15. She would pick on me a bit and always make comments about it. I wonder if these are somehow related sometimes but I dont know.”

Wait a minute — she would “pick” on her own daughter about the size of her breasts? This woman needs a whole personality transplant. She is toxic and controlling (and probably insecure about her own body), so she’s super over-involved in everyone else’s private business (and private parts).

Someone else suggested the mom make a rule that the grandma isn’t allowed to make any comments about her granddaughter’s body. “This is a good time to set the boundary that your daughters body isn’t talked about and isn’t brought up to her,” they wrote. “No comments about developing early, weight, food, etc. to prevent her from pushing those same judgements on your daughter.”

“You’re not unjustified and I encourage you to shut this shit down now,” another said. “Your mother is setting your daughter up for a life of off-hand comments that could negatively impact her body image, or worse.”

Others thought it wasn’t necessarily odd that the grandma bought the bras (grandparents think way ahead sometimes), but it was weird that she won’t let it go.

“I think it’s weirder that she keeps asking if she is wearing them,” one person wrote. Another said, “Yeah, from the title I thought, ‘a bit weird but not a big deal.’ But the constant demand she wear them? Disturbing. I’d be limiting contact.”

Another person wrote, “There’s no reason for her to wear a bra ever unless she wants to.” We couldn’t agree more. Bottom line: respect other people’s bodily autonomy, no matter how old they are or how well you know them.