The Baby-Sitters Club makes finding someone to watch your kids look easy, but in real life, securing a trusted nanny is hard. You have to make sure they 1) like your kids, 2) your kids like them, 3) they are trustworthy, 4) they are affordable, and 5) they are prepared for emergencies. If the answer is yes, then you have to make sure they’re available when you need them. See? It’s not as simple as calling a hotline to will deliver the effectiveness of a Kristy or Claudia. But babysitters have their own struggles, too — especially when it comes to loser parents. One of them wrote to Reddit to complain about her situation, revealing that she told a major lie to the parents while watching their kids.

In the “Am I The A—hole?” subreddit, a 15-year-old babysitter thought she was in for an easy night of playing with kids and putting them to bed. Unfortunately, the parents were pretty flaky.

“Last weekend one of my little sister’s classmates’ parents had a wedding to go to and asked if I would babysit,” the teen wrote. “I asked how late they would need me and if I should pack an overnight bag if they were going to be staying out all night. They said that they would be home by midnight. So I checked with my dad if that was okay because he is my ride. He doesn’t want me alone in a car with adults that he does not know.”

That all sounds great. She offered to stay the night, and the parents said it wasn’t necessary, so she arranged a ride. NBD, right? Also, how cool of her dad to come pick her up at midnight! It sounds like a great arrangement — if only the parents would hold up their end of the agreement. 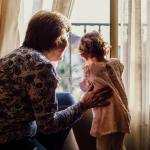 “I texted again. No answer. I called my dad and he is pissed. Not at me,” she wrote. I would be too! Especially after this girl double-checked that they would be back at midnight. So rude!

“One o’clock. I call them. No answer,” she said. “My dad went and got a coffee at home and came back. He is all calm. Not good. He is ready to blow.”

Um, I would be too? It’s 1 a.m. and you have, at this point, been waiting to take your daughter home for over an hour. It’s just so inconsiderate!

“I texted every 15 minutes. No response,” she said, and at this point, I would have called the police. The arrangement is midnight; it’s now been hours. This poor girl is in a terrible situation, but she doesn’t want to leave the kids home alone. It’s amazing how incredibly rude people can be. So, the babysitter had to get creative.

“[At] 2:20 I have an idea. I texted them that someone tried to break into their garage but that the alarm scared them away,” she said. “They were home drunk in an Uber in 15 minutes.”

Oh. My. Gosh. So … they were getting her texts every 15 minutes. They weren’t in trouble — they were literally just getting drunk and partying. To be clear, I’m all for a little parents’ night out. But they should have arranged for the babysitter to stay the night if that was the case, which, BTW, she offered to do in the first place!

“My dad made them pay me for my extra time before we left. He told me that I’m not allowed to babysit for them again unless I charged them for an overnight stay,” she said. Good for him!

“Yesterday at school I saw the mom when I was picking up my sister’s after school,” the babysitter added. “She gave me shit for scaring her and her husband. That they had checked their security cameras and no one tried to break in. I said sorry the alarm went off so I called you. She called me a liar. Which is fair. But I don’t feel bad about what I did. They lied to me first.”

Damn, good for her sticking up for herself! Her dad backed her up, too.

“My mom says I should have just sucked it up but my dad says that they broke our deal,” she added. “I kind of feel bad for tricking them into coming home from their party. But they could have told me it was an overnight or texted me that they were going to be late. My dad has brought me an overnight bag before when that has happened.”

Literally! She also added, “My mom wanted me to call the police to see if they had been in an accident. But I thought that if they were still at the wedding it would cause a scene.”

Personally, I would have called the police. But at the same time, she got the parents home, no harm was done, and nobody at the wedding was the wiser. Seems like a pretty good plan to me!

Redditors fully supported this lying babysitter. “NTA – the fact that the parents said yes they would be home at 12 & then couldn’t/wouldn’t respond for 2 hours is bullshit,” one person wrote. “Where she gets off being pissed at you is crazy!!! Please tell me they apologized when they finally got home.”

OP responded to this, writing, “They did not.”

This is so frustrating! They don’t even care about how late they were? Or that they broke the agreement and the girl couldn’t get them to come home? These people are supposed to be adults!

“You, a 15-year-old, are more responsible than two whole grown ass adults who decided getting drunk was more important than taking care of their kids,” one person wrote. “The fact that they were able to get home in just 15 mins lmao no you’re good OP.”

Someone else pointed out, “You tried the adult route and they weren’t responsive. Sounds like they wanted to get away with paying you less.”

Many offered advice on what to do if she is in a similar situation.

“Next time just text them, ‘If you are not home in the next 15 minutes, since our agreed upon time was X, I will be calling the proper authority for child abandonment.’ They were neglectful parents. They are in the wrong. Their poor planning is not your problem.”

Another said, “Every half hour after the pre-arranged end time will be billed at double the rate of the previous half hour.”

It’s a lesson learned, for sure … and hopefully a real wakeup call to those a—hole parents!