Is love in the air in Boston, Massachusetts? It’s known as the Cradle of Liberty, and it could potentially lead to a cradle of a different sort for Prince William and Kate Middleton, according to an inside source. The royal couple are reportedly “going with the flow” when it comes to getting pregnant with baby #4, and we are giddy with excitement!

“They’re both very grateful for what they have and count themselves extremely blessed to have three beautiful, healthy children to raise,” a source told Us Weekly today, referring to their kids, Prince George, 9, Princess Charlotte, 7, and Prince Louis, 4. “But if a 4th were to come along, that would be something they’d welcome with open arms.”

The source continued, “Kate and William are going with the flow in that regard, so this is neither a priority nor something they’ve ruled out. As far as their friends and family are concerned it’s very much a matter of ‘watch this space.’”

Hmm… that could mean many different things. Does “going with the flow” mean they are “trying” for a baby? Or that they’re not not trying? Obviously, we don’t know what’s going on in anyone else’s relationship (nor should we!), but it’s fun to see that the Prince and Princess of Wales allegedly haven’t totally closed off the idea of another baby, because we love a new royal!

In October, another source told Us Weekly that Princess Kate has reportedly convinced Prince William to have another baby.

“Kate has been talking about wanting another baby for a while now,” the source told the outlet. “She has always wanted four children, and while William was originally happy with three, she has managed to twist his arm.” 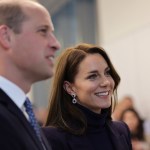 Right now, the two are in Boston for the Earthshot Prize Award. An insider told PEOPLE that the royals are “both extremely excited for the visit.”

“They feel and appreciate the warmth and excitement of the American people for their return to the U.S. and are really looking forward to meeting as many folks as possible,” the insider noted.

Maybe getting away from the kids for a bit on a romantic (albeit working) trip to the U.S. will lead to a pregnancy announcement in a few months. You never know!

These relatable moments show that Kate Middleton may be a royal mom — but she’s a regular mom too.