Christina Perri has kept her fans updated on her pregnancy after she was hospitalized due to complications. As of now, the star shared she "might meet [the] baby sooner" than expected. 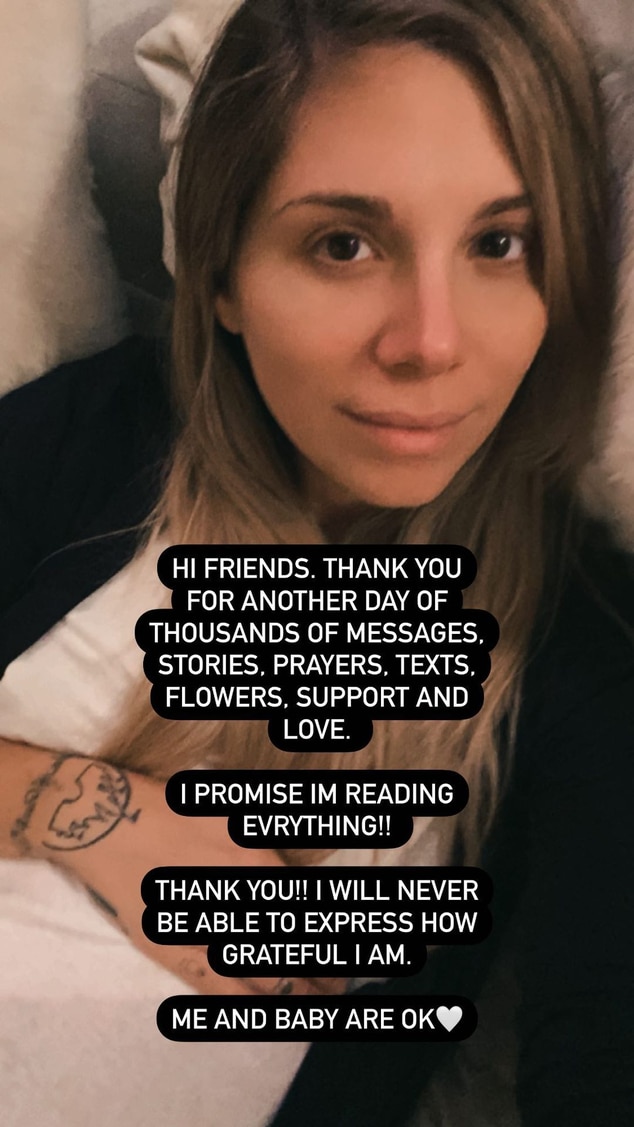 Christina Perri is keeping her fans up to date on her pregnancy, as she prepares to give birth to her second child.

Earlier this week, the 34-year-old singer-songwriter revealed on Instagram Stories that she was hospitalized due to pregnancy complications.

"Hey friends. Well, nothing ever goes as we plan," she shared on Nov. 10. "Baby is having an issue, so I'm gonna be here till it's time for baby to come out. Which might have to be very soon. Which is very early."

According to multiple outlets, the "Jar of Hearts" singer updated her one million followers on Thursday, Nov. 12 on Instagram Stories—which has since expired. The expectant mother said she had been released from the hospital and was reunited with her husband Paul Costabile and their two-year-old daughter Carmella Stanley Costabile.

"I slept, finally, and just had a nice little morning with Carmella," she shared, per Entertainment Tonight's website. "I'm feeling really grateful that I got to come last night and that I got to come home with a baby inside for a little bit longer."

Despite being released from the hospital, Christina said there are still a few complications and that her little one will need to undergo surgery after birth.

"There's a lot more that we have to be cautious of. Baby could come at any moment," she explained. "Basically, there's a complication with the baby's intestines. The baby right now is scheduled to have an operation when they arrive. We'll spend some time in the hospital. We're going to prepare for [the NICU], but anything could happen."

The star added that she and her family are staying "really hopeful" during this time.

"I guess the biggest thing is we hope the baby stays inside and can get as big as possible before this big event they have to go through," she expressed. "It's just a couple more weeks, so I'm gonna try to take it easy and hope for the best."

Before signing off on Instagram Stories, Christina thanked her fans for their overwhelming support. She also asked if they could continue to send their well wishes because she believes it "really, really helps and works."

Christina also took a moment to thank the doctors for looking over her and her little one during this time. As she put it, "Everybody is just being beyond amazing."

On Friday, Nov. 13, the Head or Heart singer praised her followers once more. "Hi friends. Thank you for another day of thousands of messages, stories, prayers, texts, flowers, support and love," she captioned her post, adding, "Me and baby are ok."

Christina also revealed that she and her loved ones "might meet [the] baby sooner" than expected.

The star's pregnancy update comes a few months after she announced she was expanding her family. "Carmella is gonna be a big sister!!! Our rainbow baby is coming in January," she wrote on Instagram in July.

Prior to becoming pregnant with her second child, Christina suffered a pregnancy loss six months before. "Today I had a miscarriage," she began her message in January 2020. "Baby was 11 weeks old."

"We are shocked & completely heartbroken," she continued. "We were only 1 week away from sharing the news so I feel like it's also important to share this news too. I want to continue to help change the story & stigma around miscarriage, secrecy and shame."

"I am ever reminded how amazing and powerful women are at making life and at healing. To all the mothers who have been here and who will be here, I see you and I love you," she continued. "I am so sad but not discouraged. When the time feels right we will try again, but today, we mourn our little life lost."