Scrolling through TikTok last night had me doing a double take — is Kanye West doing a video with Kim Kardashian?! It turns out, their daughter North West just looks that much like her rapper dad (who also goes by Ye).

In a video posted to the official Kim and North TikTok account, which is run by Kardashian, the 9-year-old totally transforms into Kanye. It is uncanny — and hilarious!

North wears a black hoodie and a black beanie to cover her long hair, and sits with her arms crossed in front of her for the video. She has used the power of her seriously jaw-dropping makeup skills to transform her face into Kanye’s. She is his daughter, which helps, but the finished look is uncanny. She nailed it.

In the video, North lip sync’s to Kanye’s song “Bound,” while her mom — also wearing all black with oversized sunglasses — sings and dances behind her. The video has already racked up 24.4 million views and 4.4 million likes, which Cosmopolitan dubbed “their best yet.”

I mean, we knew North was good at makeup (she did an amazing Grinch last month!), but this takes it to the next level. And she hasn’t even hit double digits yet!

People took to Twitter to share this amazing video, which has comments turned off. “I have never wished for Kim and North’s comment section to be open on tiktok more badly than RIGHT NOW. WHAT IS HAPPENING,” one person wrote. 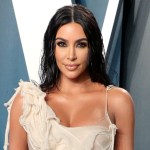 Another said, “The Kim and North duo on TikTok is definitely top fav ”

“OMFG KIM AND NORTH ARE GOING WILD ON TIKTOK,” someone else wrote.

While Kardashian hasn’t addressed the reason behind the video, she has recently opened up about her philosophy co-parenting with West, which gives us an idea about why she went along with this video.

The SKIMS founder, who shares North, Saint, 7, Chicago, 4, and Psalm, 3, with Ye, said that she is protecting her kids from the West’s recently awful behavior and the backlash it (so rightly) received while they are young.

“I definitely protected him, and I still will in the eyes of my kids, for my kids,” Kardashian said in a Dec. 2022 episode of Angie Martinez IRL podcast. “So, in my home, my kids don’t know anything that goes on on the outside world. … I’m holding on by a thread. I know I’m so close to that not happening. While that’s still happening, I will protect that to the ends of the earth, as long as I can.”

She went on to explain that this can make things difficult, but she hides her feelings about her ex for when she’s alone.

“If we’re riding to school, and they want to listen to their dad’s music — no matter what we’re going through and no matter what’s happening in the world, I have to have that smile on my face and blast his music and sing along with my kids and act like nothing’s wrong,” Kardashian said. “As soon as I drop them off I can have a good cry.”

Last month, The Kardashians star told Gwyneth Paltrow on the goop podcast about her rules for North’s social media use.

“With social media, it is hard because all the cousins, all my nieces and nephews, they’re all best friends with my kids. They’re all the same ages. So if Penelope has a TikTok, North wants a TikTok, and all the girls at school have a TikTok,” Kardashian said, per The Bump.

She added: “However, I have made a rule with their dad [Kanye West] about it — he’s not happy about that. I respect that. But it can only be on my phone. It’s not something where she can scroll and look at things. We don’t do comments.”

Kardashian’s love for her kids and the way she wants to protect their relationship with their dad is admirable, even if her video is definitely making folks do a double-take.