I will never forget the day Megyn Kelly proclaimed on television that Santa is white. She argued that both Jesus and Santa are Caucasian, a “verifiable fact,” and that we shouldn’t “revise the legacy,” turning Santa from white to Black. My daughter, who is Black, had just turned 1 and was about to experience her second Christmas, including a visit to a Black Santa at our local mall.

I grew up with the classic white, jolly, plump version of Santa, as did many of you who are reading this. Picture the traditional Coca-Cola Santa — that’s who we knew Santa to be. It was never a question in my mind that Santa could look any other way — another race, another gender, even another body type. Santa was Santa.

Thankfully, after we adopted our first child, this began to change. A friend of mine, who had once anticipated adopting a child internationally, gifted us a large collection of Hallmark African American Christmas ornaments. It was a treasure trove of small figures of choir children; a Black Mary, Joseph, and baby Jesus; angels; and a Black Santa. He was regal, with warm, brown skin, dressed in golds, burgundy, and hunter green. He was stunning and magical — and he became my family’s true Santa.

Since then, we have adopted three more children, all of whom are Black. Christmas is my absolute favorite holiday, and my kids are big fans, too. We are those annoying people who start blasting Christmas music at the beginning of November and decorate as soon as Thanksgiving dinner is cleared. I begin my holiday shopping in summer. We whip up Christmas cookies all December long, our kitchen always smelling like vanilla.

Our Black Santa décor collection is impressive, if I do say so myself. We have everything from hand towels, figures, ornaments, gift tags, wrapping paper, and much more. Come December, Black Santa covers our home with his jolly self. We also arrange to take photos with Black Santa every Christmas season.

I know our Black Santa enthusiasm makes some uncomfortable. (I’m about to burst their Christmas bubble, but Jesus wasn’t white, either — though that’s a story for another day.) Santa was historically white, we believe, but who is to say that Santa has to stay white? Why can’t Santa have caramel skin and an afro? 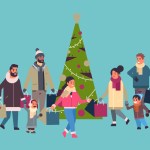 One of the many things I’ve learned from raising Black children is that representation truly matters. This is one reason why it was such a big deal when Barack Obama was elected as President, and when Kamala Harris became Vice President. In a sea of white faces, these two leaders emerged into the most powerful positions in our country. It’s monumental, sacred even. Watching their inaugurations, something that normally bores children, brought us to tears.

Santa is, arguably, the most astounding, magical, generous figure in a kid’s childhood. There’s just something incredible about Kris Kringle, Father Christmas, Papa Noel, or whatever your family chooses to call him. Who doesn’t love the man who spends 364 days a year in the North Pole, supervising toy building, eating cookies, and petting reindeer with Mrs. Claus? Then, on that one day a year, he loads up his sleigh and brings gifts to children across the world.

Kids try to stay awake, hoping to catch a glimpse of the velvet red coat or hear jingle bells and hooves on the roof. Then in the morning, they rise and see the plate they left out, sprinkled with cookie crumbs. The milk glass is empty. And by or under the tree: presents. Stockings brim with treasures.

The Santa who does these things for my children is Black — unapologetically Black. He’s a role model and a leader. He embodies the Christmas spirit.

I believe that so many find Black Santa to be “politically correct” (and I say this with a strong eye roll) because it makes them question their own beliefs about who is “good” and who isn’t. This has nothing to do with the child being on a naughty-or-nice list, and everything to do with making sure that “tradition” reigns. The problem is, that tradition is often rooted in supremacy and inequity.

Our family has no problem with Santa being represented in a myriad of ways. This reminds me of my favorite episode of The Office, where the characters comedically demonstrate the discomfort some people have with Santa being Black (Darryl) or a woman (Phyllis). If a family has white Santa décor, cool. But if a family’s Santa is Asian, Indian, Mexican, or Black, that’s cool, too.

For my children, when they were little, each of them had a moment where they would point out if someone was, in their words, “brown like me.” Similarity mattered. Seeing others with kinky, curly hair, brown skin, and brown eyes was beautiful — and deserved recognition. Santa included.

My oldest is now a teen, and thankfully, there’s way more Black Santa representation than ever before. In fact, a trip to any store during the holiday season includes us checking out any Black Santa décor. The more that diversity is mainstream, the better. Because all children deserve the accessibility of seeing a Santa who looks like them. My hope is that, as a society, we move past whiteness being the standard and default — and this includes Santa.