We are rounding the corner to the most wonderful time of the year. Toy catalogues are hitting mailboxes (and inboxes). Kids are making lists for Santa Claus. And some parents are trying to figure out how to explain to their kids why Chris Kringle doesn’t bring them the hot-ticket items on their wishlist (see: the most expensive toy or gadget on their list), but seems to do so for other kids every single year.

And it’s not just Santa Claus’ seeming favoritism that has kids confused. The Tooth Fairy is also a “culprit” that seems to shell out larger amounts of cash to some kids while sticking to lower amounts for others.

One distressed parent took to Reddit to talk about how disappointed her 7-year-old was after learning his classmate got a lot more for their first lost tooth. “My 7-year-old is so disappointed he only woke up with a dollar this morning, while his friend at school recently got thirty dollars and a king sized candy bar for one tooth!” explained the parent.

“I don’t know what to do. I hate these imaginary beings. It promotes a system of inequality where some kids’ fairies or Santas give more than others,” they added. While some parents responded with some zingers about the tooth fairy giving out candy, others empathized with the parent frustrated about the inequality that comes with magic.

“Tooth Fairy is normally the first magical being to fall for this very reason. My 7-year-old recently asked me point blank if the Tooth Fairy was real and I was honest. It’s an appropriate age to start learning the truth,” commented one parent.

Other parents who still want to keep the magic alive have found other ways to talk to their kids about differences in gifts. 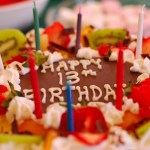 This Dad is Teaching His Daughter to be Selfish for Her Birthday, and Reddit Has Big Feelings About It

“I plan on telling my daughter that parents have to help out with these things. That’s what my parents did for us, and I still believed the ‘magic’ of everything, but it helped me to understand why some kids got more than others,” added another parent.

Others offered advice as to how to explain the disparity between gifts as something of a “flat rate.”

“We tell our daughter (6) that the tooth fair pays a flat rate per tooth. Anything over that is their mommy and daddy. 🤷🏻‍♀️ Christmas is the same, Santa will give her something a little more on the modest side, some books, clothes and a smaller toy. The bigger more pricey things come from my husband and I,” advised one parent, adding that “communication is key in these issues.”

While that commenter is right — communication is key — a larger part of this conversation needs to be between adults. Some parents have decided the right move is to explain to their children who exactly is leaving dollars under pillows and video games in stockings. Others have found creative ways to keep the magic alive while alleviating their kids of any worry that they might not have received as much because they aren’t as deserving.

How do you handle the Tooth Fairy, Santa Claus, the Easter Bunny, and all of the other magical beings that give gifts to kids on holidays?

We’ve got some great suggestions for toys at Costco that your kids will love.