Olivia Wilde offered a candid look at life as a single mom. The Don’t Worry Darling director appeared on The Kelly Clarkson Show on September 21 and discussed the growing pains that come along with raising her two kids, 8-year-old Otis and 5-year-old Daisy, with ex Jason Sudeikis.

“I think reshaping a family is tricky,” Wilde explained, noting that the situation is “doable” as long as parents surround their kids with love.

There is a compelling benefit that’s pops up while parenting as a newly single mom.  “It’s allowed for some really deep conversations with my kids about emotions, and about happiness, and about what family means, and love, and it’s actually allowed me to get to know them in a different way,” she said.

The actress/director added that her priority is, and always will be, her children. “That’s what it is. It’s as long as they’re happy and they’re healthy then, my ex and I, we agree on that. They are everything to us,” she explained.

The relationship between Wilde and Sudeikis is allegedly sticky and — as of August — the duo were in court arguing over where their two children should live, per ET. Wilde reportedly wants to be based in Los Angeles and London, while Sudeikis is interested in having roots in Brooklyn.

“Jason and Olivia have a very awkward relationship,” a source told the outlet. “They try to limit any direct contact with each other, but they both want what’s best for their kids. They are trying to sort out a manageable, stable and healthy co-parenting routine and schedule for the sake of their children.” 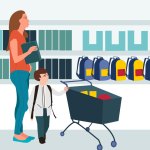 What Back-to-School Looks Like When You're a Divorced Parent

Another insider told E! News that the former couple exclusively communicates digitally or through assistants. “The only thing discussed is the kids and their schedules. They are trying to put the kids first and do what’s best for them.”

Divorce and co-parenting is an understandably upward battle. It’s nice to see, though, that Wilde and Sudeikis are putting their kids first.