Olivia Wilde has no time for the Internet trolls who attack her parenting. The Don’t Worry Darling director is mom to Otis, 8, and Daisy, 6, with ex Jason Sudeikis, and she is defending herself against people who think she “abandoned” her kids.

“I share custody of my kids with my ex. If I’m photographed not with my kids, people assume I have abandoned them, like my kids are just somewhere in a hot car without me,” she said in a November cover story in Elle. “The suggestion is that I have abandoned my role as a mother.”

She continued, “You know why you don’t see me with my kids? Because I don’t let them get photographed. Do you know the lengths that I go to to protect my kids from being seen by you?”

So wanting privacy for her kids has suddenly turned into Wilde is “abandoning” them? She is working so hard to keep them safe, deal with complicated custody issues with her ex, and making a name for herself in Hollywood at the same time. Give her a damn break!

The actress and director, who is one of Elle’s Women in Hollywood honorees, also opened up about her upcoming projects, which are about the strength of women. (Something she can definitely relate to.)

“A few of the things I have in development are about the raw determination of women,” she said. “Clearly, I idolize women who survive a system that they feel challenged by.” 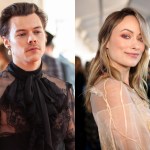 Wilde’s breakup with Sudeikis has caused quite a stir. Back in April, the Ted Lasso star had Wilde served child custody papers while she was on stage at Cinema Con. Afterward, Wilde told Variety, “in any other workplace, it would be seen as an attack.”

The move, which Sudeikis’ legal team had to breach security to make, was “something that required forethought,” she added.

She also opened up about co-parenting at the time.

“The last two years, my family has gone through this kind of restructuring and a revolution that should be a totally personal experience,” Wilde told Variety in August. “And it’s not. The most painful element of it has been women shaming me for making a decision that was for my own health and happiness.”

She explained that her kids alternate living in Los Angeles with Sudeikis and the United Kingdom with her.

“When people see me not with my kids, it’s always ‘How dare she,’” Wilde told the outlet. “I’ve never seen anyone say that about a guy. And if he is with his kid, he’s a fucking hero.”

The exes do agree on one thing though: the happiness of their kids.

“That’s what it is. It’s as long as they’re happy and they’re healthy then, my ex and I, we agree on that. They are everything to us,” she said in a September appearance on The Kelly Clarkson Show.

Now that she’s cleared the air — her kids are safe, happy, and not abandoned — kindly, leave her alone. She’s doing her best, just like all of us.