What’s better for bonding with family before the holidays that a good group project? Big cousin North West took the lead this week, teaming up with two of her younger cousins to do a full face of makeup for Aunt Kylie Jenner. Kylie, a good-spirited mom herself, sat perfectly still while the little ones did her foundation, eyes, and lips. “Doing auntie KYLIE makeup,” read the video’s caption.

And what products did the kids use on Kylie? Kylie Cosmetics, of course! They got to work using (at least) her limited-edition Valentine’s Collection Pressed Powder Palette and the Bronze Pressed Powder Palette. Fans were able to watch along as the whole look was done — with TLC’s “Creep” playing as background music — before Kylie gamely posed for a sunny “after” shot once the work was done.

The video was one of the latest short clips North has posted to the TikTok channel she launched with her mom, Kim Kardashian. The account, @kimandnorth, has already gained 10 million followers and likely will grow quickly considering the frequency with which the duo posts; they posted 5 videos in the last day alone! And their many followers apparently love what they see. The latest video showing Kylie’s makeover was up to 12.4 million views by Wednesday morning.

Kim and North often share clips of themselves lip-syncing to viral sounds, or dancing — it is TikTok, after all. But they also show off BTS moments from their lives, including a sweet instance last weekend where they attended a Lizzo concert and got to hang out with the singer herself.

Aside from their group makeup project, there is likely a great deal more family time in store for the Kardashian-Jenners with Thanksgiving tomorrow. In past years, we have had a sneak peek at the Kardashian–Jenner Thanksgiving menu (spoiler alert: it’s lavish). And they’ve been known to extend an invitation to dinner to everyone in the family, even if they’re on shaky ground.

Matriarch Kris Jenner recently took to Instagram to remind the world, “You guys know I LIVE for the holidays!” They’re known to be iconic fans of the end-of-year period, and we can likely look forward to many photo sweet moments — to be shared on TikTok! — from the extended Kardashian-Jenner brood. 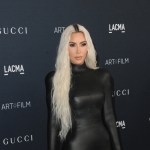 Before you go, check out all the times North West proved ‘Shady Baby’she’s a star in her own right.