Despite mounds of scientific evidence proving that physical punishment is detrimental, lots of people still think spanking their kids is an acceptable way to discipline them. According to reporting by the Washington Post, a new study appears to prove (one more time) that this belief is false — spanking is not OK. 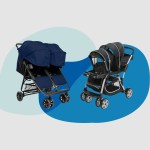 The Best Double Strollers for Big Adventures With Multiple Littles

The study, published in the March 2021 edition of the journal Psychological Science took a look at the nature vs. nurture debate and how the behavior of twins differed based on type of discipline. Researchers looked at 1000 pairs of twins, over 400 identical, and many of whom experienced different types of punishment from their parents. They results showed that those who were hit developed “delinquent or antisocial behavior.”

Liz Gershoff, a developmental psychologist and co-author of the study told the Washington Post that twin parents tend to parent the children individually, not as a set, and often one child is singled out for harsher punishment than the other. The study did not delve into why.

“[W]hat we found was that the twin who was spanked more or yelled at more within each pair, they were the ones who had more antisocial behavior,” she told the paper. “It was the same for the kids who were identical twins and for kids who were not identical twins. The amount of genetic material they shared didn’t matter. It came down to how much harsh parenting they received.”

Gershoff pointed out the irony in parents attempting to improve their children’s behavior by using harsher punishments but experiencing worse behavior as a result. “To me, it’s just further evidence that the way we parent our children really does impact them.”

She added that this study provides definitive proof of nurture over nature when it comes to children’s behavior.

“There is just absolutely no evidence for a genetic component,” she said. “And if parents are on the fence about physical punishment, this is just additional evidence that it’s not doing any good for the children, and in fact it seems to be making their behavior worse. And that, in turn, makes our jobs harder as parents.”