Lynn Spinks, a 36-year-old mom from Cedar Lake, Indiana, proved that she was all of us in TikTok, when she admitted what so many of us parents are afraid to say out loud: She hates to play with her kid (yeah, we said it). Buried within her short video was a message that every parent needs to hear, but it’s getting lost in the pearl-clutching over her honesty. 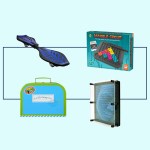 According to the Daily Mail, commenters have been calling the mother of one “neglectful” ever since the video she created back in February, in which she admitted that she doesn’t enjoy doing activities like playing Barbies with her daughter. In the viral video, Spinks said she’d much rather take a walk or go somewhere with her daughter than play with the dolls. But, because moms do things they don’t want to all the time, the 36-year-old said she powered through 10 minutes of playtime with her daughter, Caroline.

Parenting is hard, even when it’s easy. The little things really are the big things. Who knew?! #momsoftiktok #parenting #10minutes

The next day, Spinks says she was shocked to see what an impact those 10 minutes had on the little girl. “’This morning she got up and got ready for school, super good mood, and then she said will you play Barbies with me and I was thinking no,” Spinks said. “’Then she said, ‘I had so much fun when you played Barbies with me yesterday,’ and it about broke my heart, because if my half-hearted attempt to placate her meant that much, I could definitely do that again.”

Those calling Spinks neglectful really missed the part where the mother of one said that she liked doing things with her daughter, just not playing Barbies. And that’s besides the point, because the real take away from the Indiana mom’s message was that it only takes 10 minutes of half-hearted playing to make a huge impact in your child’s day.

“I feel like a lot of people didn’t watch it all the way through and think I am this neglectful mom, but the truth is that I learned how important this aspect of parenting is,” Spinks told the Daily Mail in a follow up interview.

Some shots from our family day yesterday!No mom guilt. Let’s learn together! Where do you shine as a parent? #parenting #momsoftiktok #shipshewana

Since then, Spinks has posted other videos showing the parts of parenting that she loves, including a montage of going places and this video of their March “Yes Day.”

Listen, there are lots of parts of parenting that are hard, that we have to power through to make our kids into capable adults (like potty training). Then there are things that we have to do because it’s the right thing to do as a parent (like playing Barbies when your only child asks you to in the middle of an isolating pandemic). The thing is, as parents, we need to be able to talk to other adults about how we don’t like these things, because we can’t really talk about it with our kids. Personally, we think Spinks nailed this parenting lesson in her video, and we hope other parents take note!