In a confusing development, the mother of the Florida 6-year-old paddled at school is being investigated for alleged neglect at home. On April 13, the mother in question secretly filmed a Central Florida elementary school principal paddling her daughter in front of her, apparently as punishment for $50 worth of damage to a school computer. 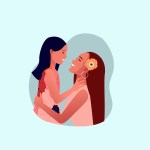 Corporal punishment is not legal in Hendry County, where the beating took place, and Principal Melissa Carter and school clerk Cecelia Self, who held down the child, are both under investigation by the Clewiston Police Department and the Department of Child and Family Services, and the Florida State Attorneys Office is considering filing criminal charges.

TMZ is now reporting that the little girl, two of her siblings, and a cousin for whom the mom also cares were pulled out of class on Tuesday and questioned individually by officials with the Florida Department of Children and Families. This is according to the family’s attorney Brent Probinsky, who said this was done without the mother’s knowledge and that he only learned about it after the fact, when officials came to him seeking to talk to the mom.

Investigators said they were acting on a tip about the mom being neglectful. The children all answered “no” when asked if the mother was abusive or neglectful in the home, and there is no evidence of any such behavior. Probinsky says the investigators then told him they wanted to follow up with the mother to ask why she didn’t step in and intervene during her daughter’s paddling.

Probinsky had previously told investigators and CBS News that the mother was afraid to intervene because she is undocumented and was intimidated. The mother also said she was confused about what was happening due to a language barrier.

“The hatred with which she hit my daughter, I mean it was a hatred that, really I’ve never hit my daughter like she hit her,” the girl’s mother told local CBS affiliate WINK in Spanish. “I had never hit her.”

The mother began to worry about what would happen later. “Nobody would have believed me,” the mother said, about why she began secretly filming the paddling when he noticed there were no surveillance cameras in the room.

Even though it goes against recommendations from the American Pediatric Association and is outlawed in many states across the country, corporal punishment like paddling is allowed in many Florida counties, though not in Hendry where this school is located. Studies shown that corporal punishment does more harm than good when it comes to child discipline. One recent study examined over 1000 pairs of twins, both fraternal and identical, and determined that the twin who was treated more harshly by parents or caregivers showed an increased tendency toward antisocial or delinquent behavior.

Other studies have shown that in states where corporal punishment is legal, Black and brown children experience more abuse at the hands of educators and school administrators than white children within the same districts.