When it comes to privacy at home, Mila Kunis and Ashton Kutcher are all about an open door policy. Literally. Kunis, who is mom to 7-year-old Wyatt and 5-year-old Dimitri, recently told E! News that everybody keeps doors open in the household — including the bathroom.

“It’s just one of those where, for better or for worse, as a family and the kids have all kind of embodied bodily function as a very standard norm.” Kunis explained.

The actress added that she never thought she’d be someone who was a public bathroom goer. But becoming a parent just has a way of changing you. After having her kids knock so many times, she finally decided: “‘Oh, forget it. Just keep the door open.’” It’s practical for sure, we’ll say that!

Kunis and Kutcher have made the occasional headline for their parenting choices. Last year, the couple appeared on Dax Shepard’s podcast, Armchair Expert, and opened up about bathing habits, both for themselves and their kids. Kunis noted that she doesn’t wash her body every day and Kutcher concurred.

“I wash my armpits and my crotch daily, and nothing else ever,” the actor explained. “I got a bar of Lever 2000 that just delivers every time. Nothing else.”

When it comes to their kids, the couple is also pretty laissez-faire about bathing rituals. 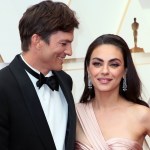 “When I had children I also didn’t wash them every day,” Kunis added. “I wasn’t the parent that bathed my newborns—ever.”

Kutcher’s motto?  “Here’s the thing—if you can see the dirt on ’em, clean ’em. Otherwise, there’s no point.”

It’s unconventional…but you know what? As long as they’re happy, their kids are happy and everyone is safe and sound the Kunis/Kutcher clan can do whatever rituals work best for them. Plus, the whole family is definitely helping save the planet some water!

Before you go, see this slideshow of Gabrielle Union’s best mom moments!