“Are you really crying?” my daughter asked as we read together. She was 8 and I was approaching 48 — I’m almost 40 years older than my kid, just as my mother was 40 years older than me. I remembered how difficult middle age had been for my mother. And for me, too, menopause was lurking — but I wanted to believe it was just the book that overcame me; after all, it was Charlotte’s Web we were reading. E.B. White must have known his story about a kind pig saved by a mama spider would cause mothers, particularly hormonal ones, to completely fall apart.

But know what? Being 40 years older than my kid — and in the throes of menopause hormones and emotions — actually makes me a better parent than my younger self would have been. Because enables me to model for my daughter that showing emotions is okay.

My daughter looked at me with raised eyebrows and wide eyes, and I worried about what she was thinking; she had never seen me cry this way before. She’d seen me hold back tears as I said goodbye to my mother when we left California, and she’d witnessed me cry out as I frantically tried to locate my husband when my mother fell at the shopping mall, sirens blaring in the background. But my daughter never saw me like this — like a child, sitting on the end of her bed, sobbing.

“Here, Mama. You can use this to dry your tears,” she said, pulling out her sleeve.

When I heard my own menopausal mother cry this way, it was hard for her to stop, and the pain of that must have been additionally devastating. It was 1979. She was 54, and I was 14 — the last child at home. One day, I couldn’t find her after school. Normally, when I got home, she’d be in the garden or kitchen or grading papers, but that day she’d locked herself in her bedroom. The muffled sobs scared me — but not because she was sad. I was scared because she was trying to hide it from me.

Because I’m the last of eight children, I was living with my mother when she entered some of the most difficult years of her life. She hid her feelings of hopelessness from those used to her strength, but she couldn’t hide them from my father and me, as much as she tried. She’d retreat into her room and lock the door, the heavy green drapes consuming her so no light could get in. Some days, she’d relent and let my father in, but she wanted to keep me out. I don’t want to keep my daughter out.

But I’m lucky: I know what is behind my emotions — something it took my mother far too long to learn. My father, a professor, grew up without a mother or a sister, and “female problems” were beyond his academic skill set. He couldn’t face that his “perfect” wife was suddenly sinking into deep depression in mid-life. One day, he tried to tell me that my mother just had “empty nest syndrome” and that’s why she was so sad. But I’m still here, Dad, I wanted to say.

When we learned, later, from the doctor, that my mother was experiencing severe symptoms of menopause that sometimes led to chronic depression, my father was blindsided. But thankfully, confronting the truth got my mother the help she needed; she could finally unlock her door, open the curtains, and talk about it.

For me, with my daughter, I’m going to talk about it from the get-go. 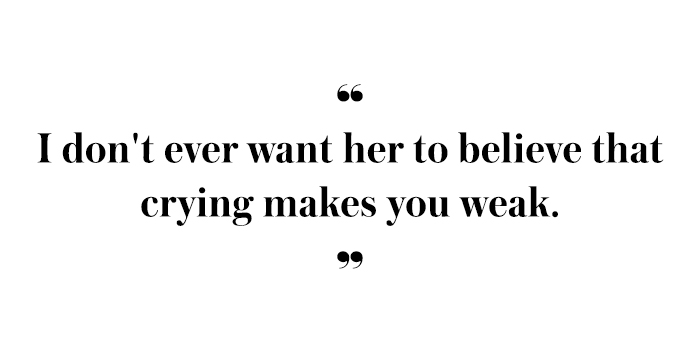 Though I was still crying, I looked over at my daughter and noticed that her blue eyes weren’t so wide anymore. I scooted closer to hug her. She offered me her sleeve, but first she wanted to touch the teardrops on my face.

“They’re real!” Oddly enough, she was exhilarated at the discovery.

My tears had already fallen, so why should I hide or dismiss them? I want my daughter to know that sadness is nothing to fear or be ashamed of. Without it, how could we ever know happiness? They are companions, and they both need our attention and respect. Now, I get to show this to my daughter every day. And I suppose I have menopause to thank for that.

Compared to my mother’s experience with menopause, my symptoms have been mild. And of course doctors know much more now than they did in 1979 about how to help women in midlife; my own doctor suggested returning to birth control, recommended a low-dosage antidepressant, and eating soy to help with hot flashes and night sweats. But although those measures are helping me, the tears keep falling.

People have said to me that a mother is selfish if she reveals her emotions — that kids having to be supportive friends to their mothers doesn’t allow them to be the children they deserve to be. That may be true for some, but I never saw my mother’s tears as a selfish act. Letting the tears fall, admitting you need help, and pushing off the shame that comes with depression takes tremendous strength. The sooner we can acknowledge that, the better chance we have of breaking through dangerous stigmas about mental health.

This is exactly what I’m doing — what I’m proud to do — for and in front of my daughter. I’m a better parent for it, and I have menopause to thank for that. Who would have thought?