Quarantine meant a lot of togetherness for families around the world, but Kristen Bell and Dax Shepard tried to make the most of what was a notably awful year by teaching their children about privilege and racism, she said in the May cover story of Self. The actors showed their two children, Delta and Lincoln, photos of the Black Lives Matter protests and the anti-mask protests in Michigan and asked her kids and noted how the pictures differed. 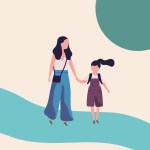 What Happens When Children Witness Anti-Asian Racist Attacks & What Can We Do About It?

Raising antiracist kids is an important goal for both Bell and Shepard and pointing out anti-Blackness takes a front seat, even renaming the game Hangman and using it as a catalyst to explain lynching to them.

“‘And that’s one of the reasons that the Black Lives Matter movement exists and is important,’” Bell said she told her daughters. The family now calls the game “Full Man.” (And yes, we can hear the claims of “cancel culture” already, but deal with it.)

And as for raising grounded kids in Hollywood? Bell is doing that too while trying hard not to minimize her girls’ feelings.

“I say to [my kids] all the time, ‘I’m not saying you can’t complain. You’re allowed to have any feeling you want, and you’re allowed to sit in it for as long as you need. But when you’re done, I just need you to remember, we have the luckiest life you have ever heard of. You have a swimming pool in your backyard,’” she said.

When it comes to how she discusses race and privilege with Delta and Lincoln, Bell has one steadfast rule, “Be super fucking honest with them.”