In the May 20 episode of Keeping Up With the Kardashians, viewers got a peek into how two of the sisters feel about one of their nannies. On a recent family trip Kourtney took issue with Kim’s nanny and Kim was not having it. 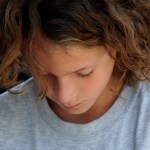 In the episode, Kim and Kourtney meet up to discuss the falling out that Kourtney described as a “little disagreement” but Kim apparently thought it was much bigger than that. “She said that she felt so degraded by you,” Kim said. “And you just started yelling at her. And you said, ‘Keep your voice down.’”

Kourtney said the nanny was lying and went on to explain her side of things. Turns out, Kourt’s son Reign had taken issue with some of the nanny’s behavior and went to his mom about it, in particular, an incident where the nanny told Reign he’d be taken to jail for talking in the car.

Now, we can see how that statement alone would be disturbing, but it doesn’t exactly seem like Reign gave his mother any context to it. Was he being disrespectful? Was she speaking in a joking or an angry manner? Was this one incident of many or out of the blue? These are important considerations when talking to caregivers about discipline, and it’s all the more complicated when it’s someone else’s caregiver who may have a very different relationship with the family who hired her than Kourtney would have with her own children’s nanny. And what’s more, these are things you’ve got to work out delicately, preferably in advance, and preferably, in private.

When the sisters hashed things out, they got a little heated. “If you think she works for you, that’s totally fine,” Kourtney said. “She would never work for me with the way she acts. That’s totally your choice.” Adding, “She will not ever be around my kids.”

Thankfully, the pair was able to work it out, after a little intervention from Khloé on Kourtney’s behalf. Later in the episode, we find Kim and Kourtney talking about their earlier tiff. “I just wanted to come over and talk to you,” Kim said. “I’m sorry for arguing with you and bringing up a whole bunch of other stuff that just didn’t have to do with the fight.”

Whatever the outcome of this convoluted fight and the nanny’s questionable employment status we hope, for the kids’ sake, things turn out well for everyone involved!

These celebrities adore their nannies.