Splitting from a spouse is never easy, but Kelly Clarkson seems to be doing pretty darn well, considering the headline-making divorce that she’s currently going through with her ex, music manager Brandon Blackstock. And as most parents going through such a tumultuous time in their lives would do, Clarkson is focusing on her kids — daughter River Rose, 7, and son Remington Alexander, 5. 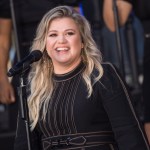 According to the new issue of People, a source close to the talk show host says that The Voice judge is staying positive as her divorce is closer to being finalized: “Kelly is more than fine. She is doing great and facing forward.” The source added, “She’s enjoying the fact that she has the kids for the vast majority of the time and is enjoying time spent with them.”

Clarkson is likely feeling more relief now that the couple’s spousal and child support payments have been decided — at least temporarily — but the process has been a costly one! According to People, based on Clarkson’s $1.9 million monthly income (yes, you read that number correctly) from her work on The Voice and The Kelly Clarkson Show, Blackstock is getting $150,000 per month, in addition to $45,601 per month in child support for their two kids. The “Because of You” singer is also paying off his attorney’s fees — a whopping one-time payment of $1.25 million.

Blackstock will only get spousal support for two years, and there’s a prenuptial agreement that they are still battling out in court. So we’ll have to stay tuned on how this divorce resolves itself. But in the meantime, the silver lining seems to be that Clarkson is able to move forward with her life and focus on the good.

“When she doesn’t work, she is all about being a mom,” a second source tells People. “She loves being with her kids.”

It was earlier this month that the talk show host asked the courts to declare her legally single, so she is definitely moving on. She also bought a new estate in Tolouca Lake, an exclusive section of the San Fernando Valley.

Clarkson was granted custody of her children back in November, and it’s clear that her focus throughout all of this has been her kids. “As Kelly has said, her first priority in all of this is to take care of the kids and all the hearts that are involved in this divorce,” a source told People at the time. “It’s been a hard time for everyone, but Kelly’s pleased with the court’s ruling regarding custody.”

Before you go, click here to see celebrity exes who will always be friends.