New mom Katy Perry opened up on Monday night’s Jimmy Kimmel Live about the birth of daughter and the lie-by-omission that is the postpartum period for mothers in America. The singer, songwriter, and American Idol judge welcomed daughter Daisy Dove, her first and fiancé Orlando Bloom’s second child, in August.

Perry complained to Kimmel about some of the things new moms experience postpartum that rarely appear on our Instagram feeds. The diapers! The sleepless nights! The swollen bits! The fact that 40 weeks (or 41, in Perry’s case) is actually more than nine months!

“What they don’t tell you is — nobody talks about the first six weeks after you have the baby,” Katy told Kimmel. “Oh my god, that’s wild! What a roller coaster!”

The star told the late night host about how the birth of her daughter coincided with the release of her fifth album, Smile, which dropped the day after baby Daisy did. Perry explained how every album cycle usually ends in a celebratory party or dinner for the release of the record. Well, every one but this one.

“This time, I was giving birth to the greatest gift of all for me, and then my album came out the next day, and I was in the hospital, and I could not wipe my own butt,” she told Kimmel. Other than the whole releasing a hit album part, we can confirm that Perry’s story about the early days as a parent check out. That first postpartum poop is a, uh, tender one.

Perry’s super honest takes on parenting didn’t start with her Kimmel visit. Earlier in the day she spoke virtually with Kelly Ripa about the realities of life as a working mother. “Giving birth, then going back to work and breastfeeding, like — holy crap!” she said. “This is what women do? Oh my god!”

Yes, this is what women do, thanks to a lack of federal programs that support paid time off for new parents (a topic we hope Perry champions like fellow new mom Meghan McCain has in recent months).

Still, we love the fact that Perry is openly talking about some of those taboo postpartum moments. Just days after giving birth she shared a photo of herself in a nursing bra and postpartum underpants on Instagram to show us that even the most glam moms look like the rest of us in those early days. 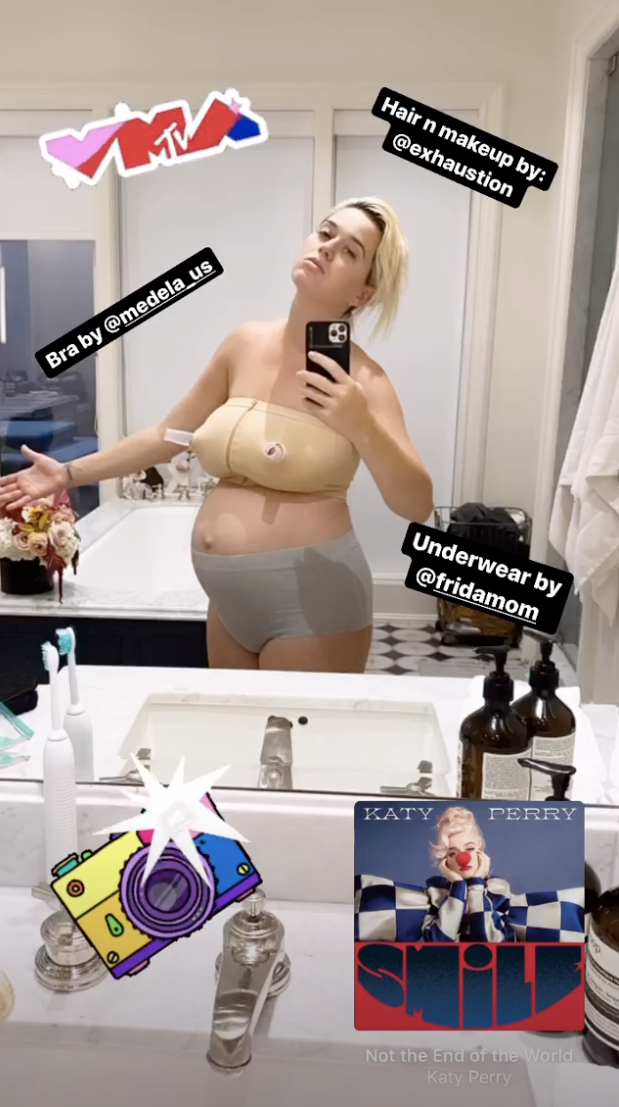 Then in August, she tweeted about that dirty lie that says pregnancy only lasts nine months long.

We hope Perry keeps on keeping it real about her parenting experiences. And we also hope that she and Bloom continue to expand their family with floral themed babies (Rose Bloom and Lilly Bloom both have a nice ring to them).