Chrissy Teigen is living her best pregnant life (and eating all the snacks!), and John Legend is dishing about their family life with daughter Luna, 6, and Miles, 4. The “Nervous” singer revealed that he and Teigen feel “lucky” that Luna was their firstborn.

“She’s very wise,” he continued. “I feel like she just gets things and she doesn’t have to explain things a lot. … You can just tell she can figure it out and move in the world and how to adjust to things very well.”

She sounds like the classic firstborn kid! Research shows that firstborns have a tiny advantage on IQ tests (likely due to their parents’ undivided attention), as well as a personality that is more likely to be a perfectionist. However, most of this is probably chalked up to circumstance, as a 2015 study found that while being a firstborn has been linked with higher scores on intelligence tests, there were no birth-order effects on extraversion, emotional stability, agreeableness, conscientiousness, or imagination. It’s like Legend says: they just got lucky!

The couple, who experienced a heartbreaking pregnancy loss with baby Jack in 2020, are already thinking about trying for another baby after Teigen gives birth. Although, it could cause some challenges.

“Chrissy, I think, wants more,” Legend told ET. “I’m one of four, so I’m cool with it. I was like, you know, once you get into that zone it’s a lot of folks — especially when you’re traveling, [it] gets difficult.” 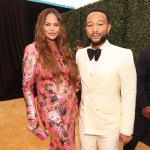 He continued, “Chrissy and I, you know, we get on a lot of planes together and once you have four kids, it gets logistically — it gets complicated.”

Parenting is getting easier though as Luna and Miles get older. “They have each other, you know, Luna and Miles will be older siblings now and there’s enough of a gap to where we don’t have to micromanage their every moment,” Legend added.

Maybe Luna and Miles will love helping out with her new baby sibling, too.