Jersey Shore's Deena Cortese announced she's pregnant with her second baby, who is expected to arrive in May 2021. 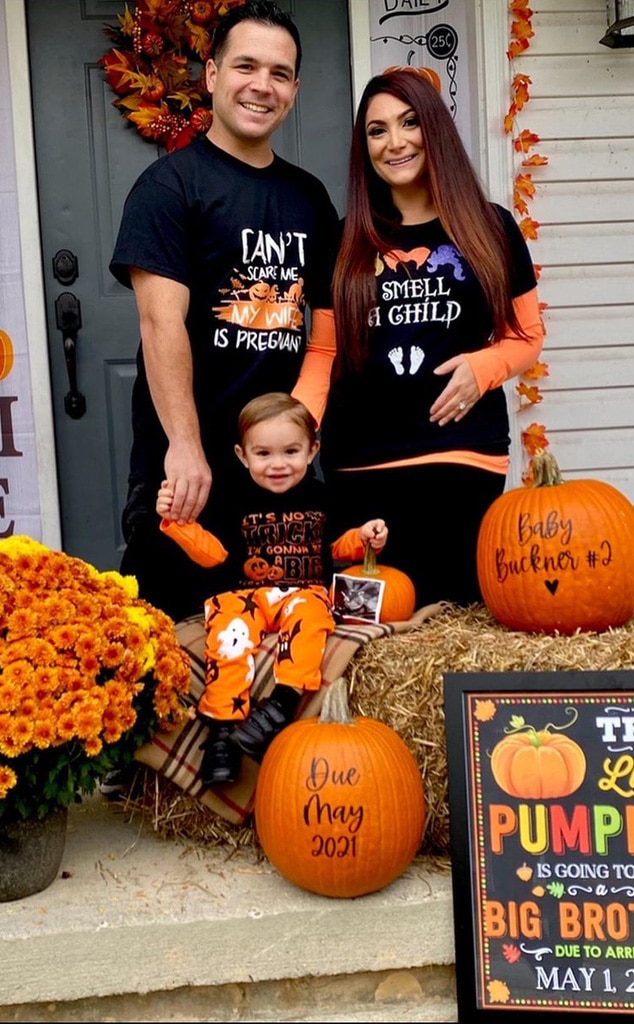 Gym, tan… and laundry for four!

For the pregnancy announcement, Deena went all out. The MTV star shared an adorable family photo on Instagram, in which the couple and their 19-month-old son, Christopher John, were all dressed up in Halloween attire.

Deena's blouse read, "I smell a child." Her husband's shirt was just as funny with the text, "Can't scare me, my wife is pregnant."

"We're so excited to announce we're expecting Baby Buckner #2 May 1, 2021," Deena began her caption on Sunday, Oct. 25. "Our hearts are filled with so much love and joy!"

She added, "CJ is going to be the best big brother ever!!! #blessed #growingfamily sooo for everyone that was asking YES YES YES ..I'm pregnant."

At this time, Deena has yet to reveal the sex of her baby or any other exciting details. But fans will recall the reality TV star was an open book when it came to her motherhood journey.

A month after giving birth to her first child, she detailed her life as a new mom. She expressed on Instagram, "Having a baby is like falling in love again. Both with your husband and your child."

A fan commented on the post about going through "a period of distaste for them, husband not child" because there is a lack of sleep. It didn't take long for Deena to chime in and get real with her response.

"I'm def starting to learn how to function on no sleep," she began her reply. "CJ has been getting better at night but it's still been a struggle .. been almost 4 weeks and we're just starting to get into a decent routine."

She added that "motherhood is def harder then [sic] I expected and I never understood ppl telling me while pregnant to get sleep now lol bc while pregnant I thought I wasn't getting good sleep but it's all so worth it."

"Ugh mommy and daddy love you so much CJ," she continued her post. "Youre [sic] our everything. i never thought i could love Chris anymore than i did until i saw him hold CJ."

The star also explained that her son's middle name, John, held a special meaning. Her father held the same moniker, and she wanted to honor him after he passed away in 2016 following his battle with leukemia.

Come next May, Deena will be a mom of two!