We know once and for all who Jeannie Mai’s number one fan is: her daughter Monaco. 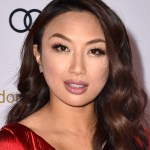 In the video, we see Monaco look lovingly at the TV where her mama is talking on her show Hello Hunnay. She’s smiling from ear to ear, playing with her little feet, and overall, looking like she’s having the best time while watching her mama (and grandma!) on screen. Monaco is such a mama’s girl already, and we couldn’t stop watching this adorable video.

Back in 2021, Mai announced on the show The Real that she and her husband Jeezy were expecting their first child together. They then welcomed their daughter Monaco Mai-Jenkins on Jan. 11, 2022.

Mai has been open about everything that comes with being a first-time mom, from the hard breastfeeding schedules to the sweet moments like these. We love her transparency throughout the sometimes difficult journey. In a recent interview with People, she admitted she’s “never felt so proud of myself, and never felt so much more like a woman.” She added that it’s a lot to take on, but she’s been ready. She added, “It’s just a lot of pressure — yes, I’m putting on myself — to perform. But I’m trying and I want to reward myself just for doing that.”