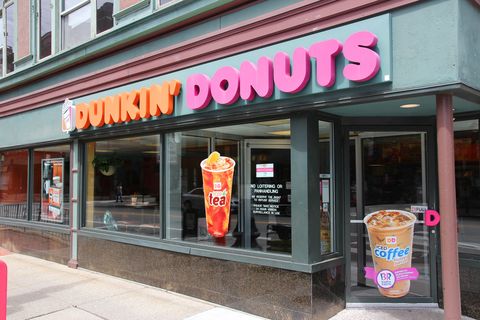 After months of speculation (and a few stores officially opening as such), Dunkin’ Donuts announced on Tuesday its no longer Dunkin’ Donuts. They’re just…Dunkin’.

The “Dounts” drop “officially puts the company on a first-name basis with customers,” a press release explained. “The change will take place in January 2019.” That means that come 2019, all the DD packaging and ads you know and love will just read “Dunkin’.”

Really leaning into the whole “first-name basis” thing was this follow-up tweet from the giant: “After 68 years of America running on Dunkin’, we’re moving to a first-name basis. Excited to be #BFFstatus with you all.”

It’s official: We’re going by Dunkin’ now. ? After 68 years of America running on Dunkin’, we’re moving to a first-name basis. ? Excited to be #BFFstatus with you all ?☕️? #firstnamebasis #besties pic.twitter.com/hmzd2Bamlm

Die-hard Dunkin’ fans (and the webz in general) are readying themselves for the blowback. Others can’t believe this is a thing people are extremely upset about.

In the office, we’re talking about the mistake that is @dunkindonuts becoming just Dunkin’. We started calling it Duncan. This led to Duncan, the yoyo company. It then occurred to me the newest M&A that needs to happen – Duncan Yonuts. Imagine the possibilities.

I’m not mad, but they could change the name to Keep The Baked Goods Out Of The Coffee & I’d continue to call it Dunkin’ Donuts. I’ve never said just Dunkin’.

It also begs the question: what will people who’ve grown accustomed to saying “Need me some DD” going to do now? They can’t just run around saying—I mean, they could, but—OK. Everyone just go back to enjoying donuts and not worrying about this, OK?