My son, the third and youngest child in our family, had just turned four. I sensed the familiar urgency that our family wasn’t complete, and it was time to adopt again. My husband, the more practical partner, wasn’t sure. I told him I wanted to research a few adoption agencies — you know, just in case. 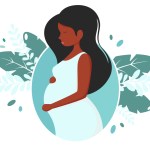 I Feel 'Survivor's Guilt' Toward the TTC Community Since Giving Birth

This “just in case” quickly turned into sharing our profile book — that’s a collection of captions and family photos — with a couple who was seeking to place their child for adoption. The social worker asked me if we could throw together a book in the next 24 hours, and I obliged. Rarely do adoptions happen so quickly, so I figured, “Why not?”

We were chosen to adopt our daughter — their daughter — four months before she would arrive. This is how the domestic infant adoption process often works. The biological parents choose among many hopeful adoptive parents, carefully selecting whom they wish to raise their child. It’s a bizarre, complicated, bittersweet, and highly stressful process. At the center of all decisions should be the child: the one adoption will impact the most.

During the four months that we waited to see if “the baby” (as we called her) would become our baby, we began to prepare. We converted our home office into a nursery, rolling pink and white paint onto the walls. My husband put together a new crib. The birth parents requested that we name the baby quickly, so that all of us could began to call our “she” and “her” by a name. We collectively agreed on a beautiful name.

This adoption journey was drastically different than our first three. Our first two adoptions were spur-of-the-moment, frantic phone calls from our social worker saying the baby was already born and we had been chosen to adopt. Our third child was born two and a half months after we “matched” with his biological mom. This time, the wait for our daughter was longer and full of more ups and downs.

What surprised me most was that her biological mom asked me to sit beside her in the operating room when the baby would be delivered via c-section. I immediately said yes, if that’s what she desired. I would never ask a mom for such an honor, but I was absolutely excited that for the first time, I would be able to watch one of my children come into the world.

I have seen vaginal births, but I had never witnessed an in-person c-section. I understood what to expect, medically speaking. However, I had no idea what it would be like to hold the hand of a woman who would bring her — our — daughter into the world and then bid her goodbye. You see, adopting a child can be beautiful, but it’s also absolutely heartbreaking. One mother’s loss is another mother’s gain, a juxtaposition that I still struggle to wrap my mind around.

We counted down the months, then weeks, and then days until our maybe-baby was scheduled to arrive. We packed hospital bags, since we would be given a hospital room in which we would be allowed to care for our daughter if adoption was the decision. On the morning of my daughter’s birthday, we met up at the hospital and waited, pacing the waiting room like dads in the 1950s.

The hospital was busy — far busier than usual, according to the nurses. The c-section, previously scheduled early in the morning, kept getting pushed back. Finally, I was directed to a pre-op room and handed papery scrubs and a surgical mask. It was time.

A nurse escorted me into the bustling operating room. It was far brighter and louder than I anticipated. This is it, I told myself. Taking several deep breaths, I muttered prayers for protection over the medical staff and my daughter’s first mother. The anesthesiologist placed a wheeled chair in front of me, smiled, and commanded me to sit. Then he casually chatted about the balmy temperature outside while pushing buttons and asking the other medical staff questions.

I took my daughter’s birth mom’s hand, and she squeezed mine — hard. We both felt the weight of this moment, in our own ways. I can’t speak for her, of course. I haven’t ever given birth, and I have never placed a child for adoption. All I could do was whisper encouragement and not let go of her hand.

The doctors and nurses continued to chat — casually, issuing directions to one another. They checked in on my daughter’s birth mother and offered a running dialogue of what they were doing. To them, this was another c-section, the fourth or fifth of the day — but to us, this moment would change everything. One of the doctors popped up over the divider and shared, “She’s here!”

We heard a meek cry, and then a nurse carried a bundle in her arms to a small exam table to begin cleaning, weighing, and swaddling her. I was directed to follow her, observing the seven-pound baby with large brown eyes. Then, she was placed into my arms.

From the moment she was born, and for about two hours after, my daughter’s eyes were wide open; she never fell asleep. She arrived into the world so abruptly, and I truly believe she was curious. This has carried on for nearly six years now. She always wants to know exactly what’s going on.

After the c-section procedure was complete, I escorted my daughter’s birth mom into a recovery room where the two dads, one by birth and one by adoption, anxiously awaited our arrival. We took turns holding our shared daughter, reveling in her alertness and features. We snapped dozens of photos, commemorating the moment.

I didn’t grasp the significance of my daughter’s birth until months later, as the whirlwind of adopting a new child began to settle into everyday motherhood. As I spent my days preparing her bottles, rocking her to sleep, and trying to give her a little space from her three older (and very excited) siblings, I realized how sacred adoption is. I was chosen to be my daughter’s mom, and I had the unique honor of watching her arrive into the world.

When I look back on that day, I remember the tiny details like the unseasonably warm weather, the friendly tone of the doctor, the feel of my daughter’s birth mom’s hand in mine. We had to grow our relationship to mutually trust one another — even when we both knew the adoption may or many not happen. I remember promising her, many times, that no matter what she chose, I was grateful for the journey we would have and I would support her.

This year, my daughter will start kindergarten, another significant moment in a child and parent’s life. Having the privilege of being present at her birth was a tremendous gift, one that I will always recognize as the invitation to become her mom from the moment she arrived.