A premature baby who was born small enough to fit in the palm of a hand left the NICU and went home with his thrilled family after a long hospital stay.

“After 460 days of constant NICU care, baby Kendall Jurnakins finally gets to go home with his family,” the non-profit healthcare organization Ascension posted on Facebook this week, sharing a March 16 photo of the boy leaving in a stroller while applauded by hospital staff. “Admiration for the caregivers on the NICU team at Ascension St. Vincent Women’s Hospital in Indianapolis, and to the faith of his family in the face of adversity.”

On December 11, 2020, the boy was born at 25 weeks and weighed just 15 ounces. Kendall’s neonatologist Dr. Taha Ben Saad told Good Morning America that he was given a 50 to 60 percent chance at survival adding, “… this is only survival, not survival with complication or long-term problems, but he actually beat some odds.”

Kendall’s mother Sparkle Jurnakins also told GMA that she had an emergency C-section due to her high blood pressure and that she suffers from diabetes and only has one kidney.

The Mayo Clinic says a premature birth is one that takes place before the 37th week of pregnancy noting, “the earlier your baby is born, the higher the risk of complications” such as respiratory distress, which Kendall had, along with chronic lung disease.

Sparkle, whose son was placed on a ventilator and given a feeding tube during his hospitalization had her own health battle. When Kendall was eight months old, she was diagnosed with COVID-19 and admitted to the same hospital for two months, while her husband Keith cared for their two other children.

However, the mom recovered and was able to embrace her baby in December 2021. “I thought he was not gonna remember me because he was so tiny when I went in the hospital,” Jurnakins told GMA. “Soon as I got there, he just laid on me and looked at me the whole time. It was the best feeling in the world.” 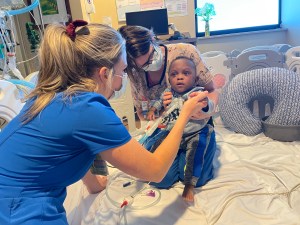 Today, the boy is making big strides. “He’s Mr. Personality. If you ever meet him, you will always remember him,” Sparkle told GMA. “He’s funny, he likes attention.”

A spokesperson from Ascension sent the following statement to SheKnows: “The Ascension St. Vincent NICU staff will partner with Kendall’s pediatrician for continued care and rehabilitative therapy. We congratulate the Jurakins family on a miraculous recovery and celebrate Kendall’s bright future with full hearts.”