Morning sickness is the worst. I had to give up coffee because it made me want to gag and eat a high protein snack every few hours, so I didn’t feel dizzy. It can feel relentless, it can last all day, and it can make you so miserable — and Hilary Swank felt it times two. The Alaska Daily star is currently expecting twins with husband Philip Schneider, and she said yesterday that the first trimester was “double” the sickness.

“I was having some bouts of morning sickness for a while there,” she told Extra. “My friends tell me when you have double, it doubles the hormones, double the sickness, double the everything.”

That sounds awful! I could barely handle morning sickness for one baby at a time — I can’t imagine how it must feel for two at once!

According to the American Pregnancy Association, some mothers report an increase in severity of morning sickness, but others don’t. So it just depends on the mom, like most other pregnancy symptoms!

Luckily for Swank, she is in her second trimester now and “feeling better.” She also mentioned she’s always wanted kids.

“It’s something I thought about even as a young girl,” she told the outlet. “It’s just something that was on my mind. It’s just nice to be here and be pregnant.” 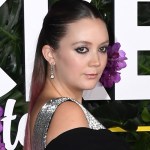 “Having a career and not having the right relationship … all the elements needed to come together and be right,” she added.

Swank, who revealed on The Kelly Clarkson Show that the twins were due on her late dad’s birthday, said that she knows her dad would be “happy.”

Despite the sickness, Swank is simply glowing in her pregnancy. We are so happy for her!