Gabrielle Union’s 4-year-old daughter Kaavia James (aka, Shady Baby) is in hot water after a recent sassy moment with her daddy Dwyane Wade. The Strange World star went full investigative reporter mode to learn more details about the jaw-dropping backtalk, and the resulting video is so funny.

“What did you say to Daddy?” Union asks her daughter in the video. Kaavia is walking around in a blue sparkly tutu and a shirt that foreshadows the situation, which reads: “I rule Daddy’s heart.”

The camera cuts to Union, whose eyes are wide. Her hand covers her mouth in shock at the backtalk. “What did Daddy think when you said that to him? What was Daddy’s face, what did it look like?” Union asks her daughter.

Kaavia stops, thinks for a second, as Union pretends to bite her nails in anticipation. Then Kaavia busts out laughing and slapping her knee. “He laughed?” Union asks incredulously. It seems a little suspicious that he would have found that attitude funny.

Then Kaavia simply walks away — acting like she’s queen of the house. Union turns the camera back to herself and gives a look. “Oh, I wish she would say something crazy to me,” Union imitates Wade’s voice. It seems like he was all prepared to talk to her if she used sass, but in real life he just let it go. Union gives him a look, then says, “You laughed?!” 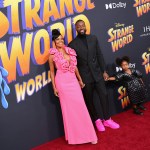 So like any mom who is looking for solidarity in parenting their wild toddler, she goes to confront Wade.

“Bro, just be quiet,” Union repeats, as Wade just looks at her. His eldest son, Zaire, 20, turns to look at his dad’s answer.

“What did you say?” Union asks, as Zaire smirks and looks away.

Wade, trying to hold back a smile, responds, “I haven’t responded yet.” Uh-huh, sure… Zaire just laughs — he knows the truth!

“I definitely thought about the kids though,” Wade said. “I was like, ‘what would I have done if Zaire and Zaya had said that.”

Zaire looks at him and says, “We didn’t run the house,” which makes Wade crack up laughing (in pretty much the exact same way Kaavia had demonstrated earlier). Everyone knows baby girl Kaavia runs this house!

“We thought we had a plan for when @kaaviajames reallllllly TRIED IT,” Union wrote in the caption of the hilarious video. “Cut to @dwyanewade 🧐🤷🏾‍♀️ meanwhile, me and @zaire are still in shock over here. Parents tap in. #Toddler.”

Someone else wrote, “But you see what her t-shirt says. there are no surprises here!”

“😂😂😂😂no one surprised wrapped around her fingers-/ all of them,” someone else said. “Cold busted!” another wrote.

“This is a perfect story start to finish. 😂😂😂” another said. Someone else pointed out how Kaavia was just happily dancing throughout it all. “Meanwhile, Kaav frolicking and unbothered! Bahahaha!”

Wade has a soft spot for his daughter, and it’s actually pretty cute (even if Union is shocked at her husband’s reaction). What can we say? We would have done the same thing, she’s just so darn adorable!