Disney celebrates its 100th anniversary this year! In tribute, Funko has announced a brand new Pop! figurine — and SheKnows has an exclusive first look and pre-order link, because you’re going to want to add the icon himself, Walt Disney, to your collection.

The unveiling of the new Pop! is a part of Funko’s third annual Funko Fair. This year, the virtual event takes place on January 18, January 25, and February 1, providing fans with three full days of exciting and highly-anticipated collectible announcements showcasing products set to hit retail later this year. With Funko’s wide range of licensor partnerships and fandom offerings, Funko Fair aims to foster a sense of community for both devoted Funatics and new pop culture aficionados through their shared enthusiasm for all things Funko. (To stay updated on the Funko Fair happenings and the newest product announcements, launches, and events, visit Funko.com and follow the brand on Facebook, Instagram and Twitter at @OriginalFunko.)

But back to the exclusive. Standing four inches tall, the Disney 100 Walt is cast in a charming sepia tone and cradling two of his most beloved characters: Dumbo and Timothy Q. Mouse, from Dumbo, Disney’s fourth animated feature film, which was released in 1941. You can bring a piece of the Disney magic home with the man who started it all! 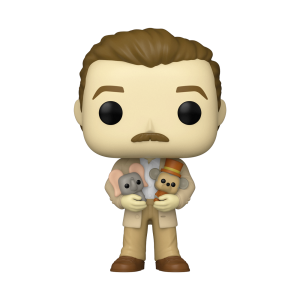 The brand new Funko Pop! Walt Disney figurine is the perfect addition to any Funko collection, whether you’re a die-hard Disney aficionado or just love Pops. Snag yours today before they sell out, because these collectible Pops fly off the shelves!