Welcome to the world, baby Sly! On Thursday, Emily Ratajkowski announced on Instagram that she and her producer-actor husband Sebastian Bear-McClard are first-time parents to a new little human. And their choice of baby names suggests that one or both of the celebrity couple might be big fans of the Rocky franchise. 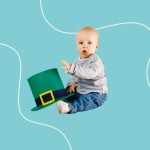 Honor the Emerald Isle With These Irish Baby Names

“Sylvester Apollo Bear has joined us earth side,” the actress and model captioned the photo. “Sly arrived 3/8/21 on the most surreal, beautiful, and love-filled morning of my life.”

While Sylvester is obviously the first name of the actor-director-writer Stallone who plays boxer Rocky Balboa in the movie series, and Apollo is the first name of his rival-turned-friend, Apollo Creed, there are other potential meanings to this unusual baby name. It is possible they weren’t thinking of the franchise at all.

Sylvester is related to the name Silvester, which means “of the woods” or “of the forest.” With the dad’s last name including the animal “bear,” maybe the parents expect the baby to be like a little bear in the woods? Very cute.

The middle name of Apollo, however, comes from the Greek god of many amazing things, notably the sun or medicine, as well as music, poetry, and dance. The form of the name as Apollos, meanwhile, means “manly beauty.”

While both of these names evoke a male gender, the 29-year-old celebrity revealed in a digital cover story for Vogue that not only were she and her husband not interested in knowing the gender of the baby before they were born, they didn’t expect to know the child’s gender until he or she was an adult.

“When my husband and I tell friends that I’m pregnant, their first question after ‘Congratulations’ is almost always, ‘Do you know what you want,’” Ratajkowski wrote in the Vogue essay in which she described her pregnancy in October.

“We like to respond that we won’t know the gender until our child is 18 and that they’ll let us know then,” she continued. “Everyone laughs at this. There is a truth to our line, though, one that hints at possibilities that are much more complex than whatever genitalia our child might be born with: the truth that we ultimately have no idea who — rather than what — is growing inside my belly.”

Since announcing she was expecting, Ratajkowski has documented her growing belly and changing body on social media. As a person clearly comfortable in her own skin, many of the photos showed a lot of it in stunning shots.

Though the pandemic has led to more of a COVID-19 baby bust than the predicted baby boom, it seems like celebrities are welcoming babies right and left in 2021. Congrats to the Ratajkowski-Bear-McClard trio and all the other famous families expanding their numbers this year!