In it, Peltz opened up about headlines that reported her and her mother-in-law, Victoria Beckham, were butting heads. The actress addressed the root of the rumors, which revolved around a dust-up with her wedding dress. The interview allegedly upset David.

An insider told The Daily Mail that he read the “riot act” to his son. “I don’t think David has ever lost his temper with Brooklyn or had cause to talk to him harshly, but that has now finally happened,” the source said. “He had it out with him and told him: ‘We don’t do this in our family – and you know that we don’t do this in our family…what happens next is up to you, but we are done with the drama.”

A report from The Daily Mail also noted that Brooklyn has allegedly “forgotten that he is a Beckham.” Aside from the wedding dress drama, which involved Peltz not wearing a Victoria Beckham design, the family was reportedly not seated at the “top table” at the wedding and the couple didn’t spend much time with the Beckham family after the wedding, instead going on a yacht honeymoon with Peltz’s family.

For Victoria’s part, the fashion designer and singer is supposedly trying to make amends with Peltz, though she’s “bemused” as to why her daughter-in-law keeps “stoking the rumors of a feud.”

“David and Victoria have both reached out to her to try and make peace, and find a way to get along,” a source told The Daily Mail. “David and Victoria would love to spend more time with their son and his wife, and be given the opportunity to welcome her into the fold, especially given that Brooklyn practically lives with his parents-in-law.” 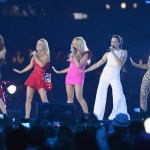 Family drama is so awkward and uncomfortable for all parties. Here’s hoping that Peltz and the Beckhams find some common ground! We’re rooting for them.