The mom-and-daughter bond is serious between Friends alum Courteney Cox and her 17-year-old daughter, Coco Arquette. Cox has recently — well since 2019 as far as we can note from her Instagram — been sharing covers of songs like this one with Brandi Carlile, and this one with Ed Sheeran and his new hit “Bad Habits” that she’s learned to play on the piano. And of course, there was that collaboration with Sir Elton John, Carlile, and Sheeran for this hilarious nod to Friends and Lisa Kudrow’s Phoebe character: “Tiny Dancer/Tony Danza”! But we’re getting all the feels from Cox and her duets with her daughter, like this new one she shared of their cover of Adele’s first hit, “Chasing Pavements.” 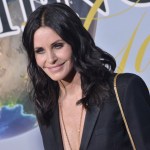 Courteney Cox Has Had Enough of This Friends Thanksgiving Reference

Coco has a beautiful voice and made a few appearances, including here singing Fleetwood Mac. Mom has even admitted that she’s bartered with Coco for the Instagram appearances — in exchange for singing, Cox gives Coco the freedom to hang out with her friends (all in jest, we’re sure).

“I love my Coconut’s voice,” Cox simply captioned the clip, in which they are accompanied by a guitarist. There’s really no need for her to say much more because you can tell how proud she is of her girl as she keeps glancing up at her from the piano as Coco belts out the song. The fashionable teen is dressed in wide-legged jeans, a criss-cross navy blue top with hearts, and what looks like a pair of white boots. Very chic!

Cox has made a habit of doting on her daughter via the social app and we can see why. Mom and daughter bonds are the best!