“Ok ok we had a baby,” the Saturday Night Live star wrote on Instagram Wednesday. “His name is Cosmo. We love him very much. Privacy would be greatly appreciated. For all inquires please contact our publicist @chethinks,” referencing his SNL co-star and bestie, comedian Michael Che. The news came shortly after Jost revealed the couple were expecting their first child together — and that their baby was born! Johansson also has a daughter named Rose Dorothy, 7, with ex-husband Romain Dauriac. 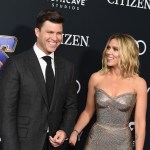 We’re digging the name Cosmo, which, according to the website Baby Names, is of English descent and means “order.” But some fans of Jost, who is known for his wise-cracking humor, speculated on Instagram whether the name was real. “Pardon?” someone wrote under the post. “Is this a joke?” said another. Others called the name “unique” and “cool.”

As SheKnows previously reported, pregnancy rumors started swirling this summer, when a source told Page Six that Johansson was “due soon,” with another stating that she had been keeping her baby news “very quiet.”

The Sing 2 actress and author of A Very Punchable Face: A Memoir got engaged in 2019 and were married in a small ceremony in October 2020.