Coco Austin is no stranger to being mom-shamed, but that doesn’t mean she’s invincible to the constant criticism. During an appearance on the Tamron Hall Show, the mom of one broke down in tears after seeing a surprise video from her husband, Ice–T.

In the video, the actor is on the set of Law & Order: SUV, and he says, “This is a shout-out going to my wife Coco. You are the most incredible person I’ve ever met, the nicest person I’ve ever met, and the best mother to Chanel that anyone could possibly imagine, alright? I love you to death; 22 years, baby, and it gets better every day.”

After the clip had rolled, Hall told Austin, “He wanted to come surprise you but he was stuck working, so he sent that in.” Austin, while dabbing tears away, said, “You know, as a mother, you don’t hear that much… You don’t hear that much from everybody. I have the whole world… and I’m underneath a microscope all the time.”

Trying to tame her tears, Austin continued, “And you don’t hear what good you do. You don’t hear the goodness. You just hear the bad. And I know I’m a good mother because I dedicated the last six years of putting everything aside — my career, everything, just for her.” On the brink of a sob, Austin said, “You just want a little love, a little respect from people.”

The model has come under intense public scrutiny for several of her parenting choices, including bathing her 6-year-old in a sink, toting her around in a stroller, letting her wear fake nails, and wearing a swimsuit deemed too revealing during an outing to a children’s park with Chanel.

It’s no secret that the internet is a vortex of toxicity and hot takes, so it isn’t exactly surprising that trolls are constantly coming for Austin. However, Austin is right: She’s a good mom. Maybe some people wouldn’t bathe their kid in a sink or push their 6-year-old in a stroller or feel as comfortable with their body as Austin, but none of those things make her a bad mom or a bad person. Like so many divisive topics today, Coco Austin’s parenting choices get people riled up — but for us, if she’s not hurting anyone and both she and her family are happy, how she parents and conducts herself is no one else’s f—king business. 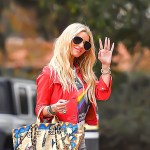 Even when you’re famous, Mom Guilt is a thing, as these celebrity moms show.