Many American kids experience Martin Luther King Jr Day the same way: A lesson on the “I have a dream” speech and a day off school. Like with the upcoming Black History Month, its an event non-Black parents, and especially white parents, can ignore or pay lip service to. A common piece of advice for white parents wanting to do better is that racism and race in American need to be an ongoing conversation with kids, not just something discussed once a year. And even if your family regularly discusses civil rights struggles, both past and present, MLK Day is still a great opportunity to honor King’s legacy through acts of service and education.

Books about civil rights and Dr. King can range from bland narratives about acceptance that implies the fight for equal rights is over to truly powerful and evocative books that wrestle with bigger questions. Many children’s book authors and illustrators have masterfully found ways to balance age-appropriateness with honesty – you just have to know where to look. One source for parents looking for new books is Goodreads, the social networking site for book lovers. Readers can create lists of books they want to read, as well as rate and review completed books. Finding out what teachers and parents have already enjoyed (and why) is a wonderful way to find engaging books around a topic. In honor of MLK Day, we asked Goodread’s editors to pick some of the most popular books on the site about Dr. King and civil rights. None of these books offer simple, feel-good stories. Instead, they all are wonderful jumping-off points for parents and children to talk and learn together on MLK Day and throughout the year. 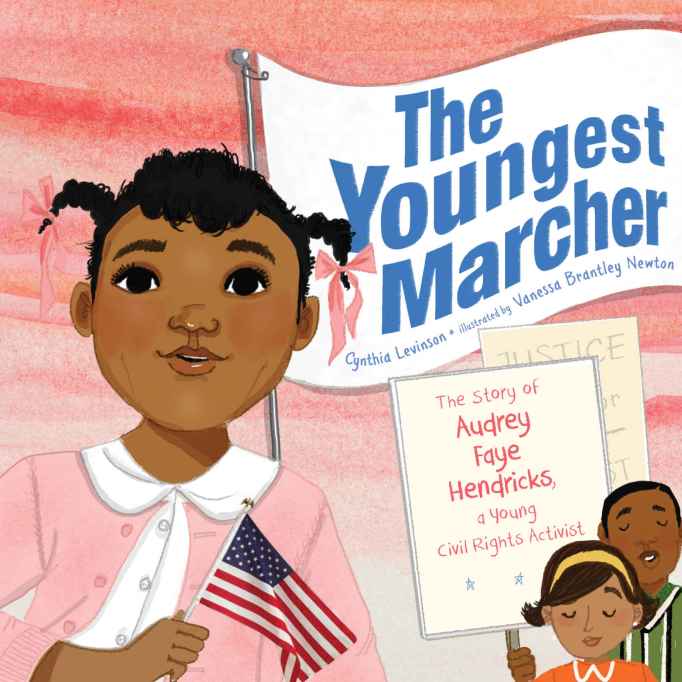 Many popular picture books about the civil rights movement center the narrative around kids. This both allows young readers to identify with the main character and see the ways that even young kids can make a difference. The story of Audrey Fay Hendricks, the youngest child known to have been arrested in the fight for civil rights, does both things masterfully. Readers join young Audrey as she chooses to march with other children and face physical violence and arrest.

What Goodreads Fans Say: “My kids had lots of questions about this book — which is always a good sign.” “If I’d been introduced to history this way, I may actually have enjoyed it and wanted to learn more.”

Be a King: Dr. Martin Luther King Jr.’s Dream and You 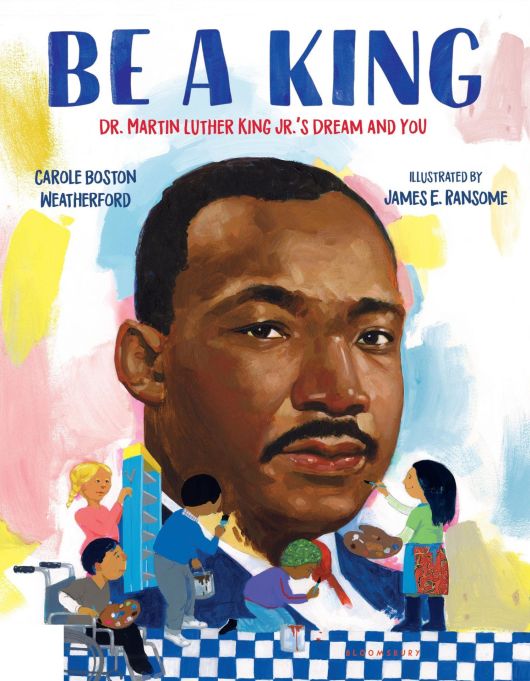 With a focus on everyday actions kids can take to honor King’s legacy, this book goes beyond just bland invectives to be kind. Children are told to stand up to bullies and learn as much as they can, but are also told that stamping out hatred and recognizing bigotry are key ways to “be a King” as well. The book also offers a great jumping off point for discussion around ways children can learn to recognize discrimitation and injustice in their own world.

What Goodreads Fans Say: “This picture book is a fabulous testament to Dr. King’s character and legacy, giving examples of how children can ‘Be a King’ through different actions that spread kindness and build a better world.” 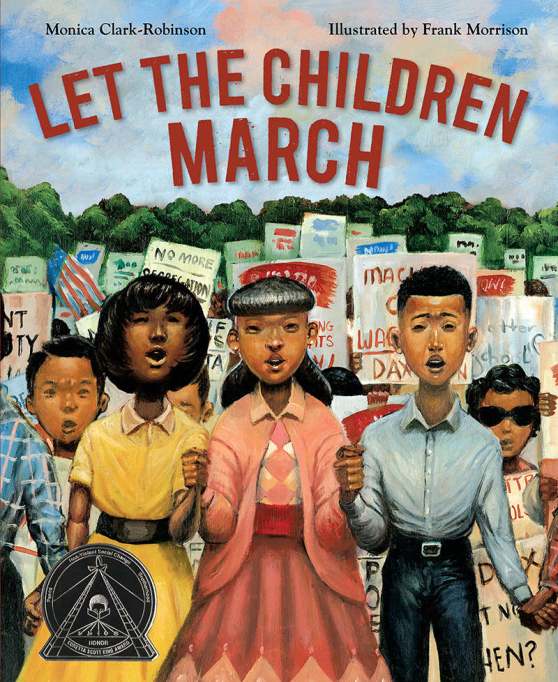 Another account of Birmingham Children’s Crusade, Let the Children March  won the 2018 Corretta Scott King award for illustration. Both the illustrations and words help bring the story to life to engage kids of all ages.

What Goodreads Fans Say: “Stunning illustrations with accessible, engaging text for young readers. Don’t miss the timeline in the endpapers and additional resources in the back.” 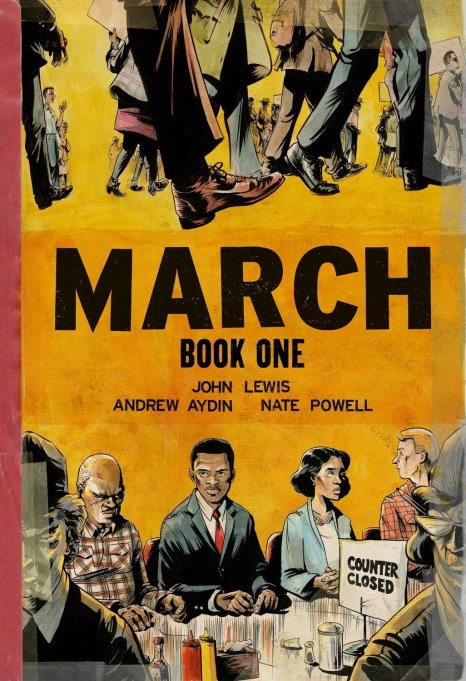 For older kids and adults, consider John Lewis’s autiobiographical graphic novel March. The trilogy covers Congressman Lewis’s early life and involvement in the civil rights movement in the 50s and 60s in Nashville and beyond. The engaging illustrations bring the story to life, and since it’s a graphic novel, it’s a perfect book for parents and older kids to read over the long weekend.

What Goodreads Fans Say: “The story of John Lewis is a story embedded in the best of what America has always aspired to be – and that aspiration is needed (now more than ever) if we hope to march forward towards a peaceful future.”

Memphis, Martin, and the Mountaintop: The Sanitation Strike of 1968 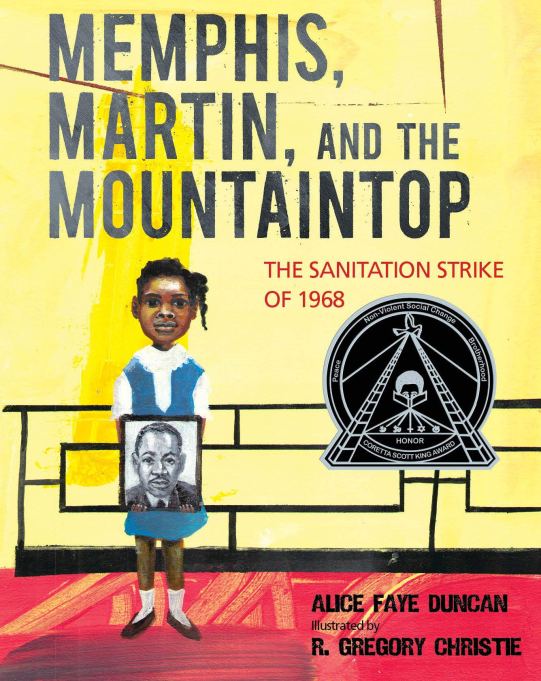 Few books, especially ones for children, focus on his assassination or his work with unions in advocating for better working conditions for Black workers. This book deals with both — King was in Memphis to support striking sanitation workers when he was killed. Mephis, Martin and the Mountaintop is inspired by these events and is told through the eyes of a daughter of one of the strikers.

What Goodreads Fans Say: “This isn’t just another Martin Luther King book. For the first time, an author has (vividly) written the story of the Memphis Sanitation Strike of 1968. The uniqueness of this piece of work is not the introduction of this particular event in civil rights history via picturebook format, but the powerful young voice of a child through which it’s told.” 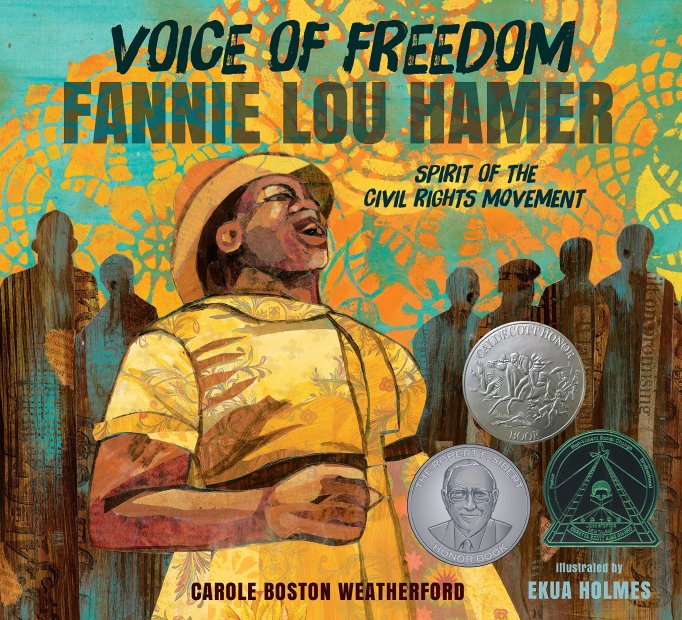 Fannie Lou Hammer’s life and work are brought to life in 22 stunning free-verse poems. Suitable for older elementary school and up, the poems are matched with quilt-like illustrations that capture the spirit of the poems. The book is a wonderful introduction of a civil rights icon who rarely appears in the small list of Black Americans covered over Black History Month and MLK Day.

I Have a Dream 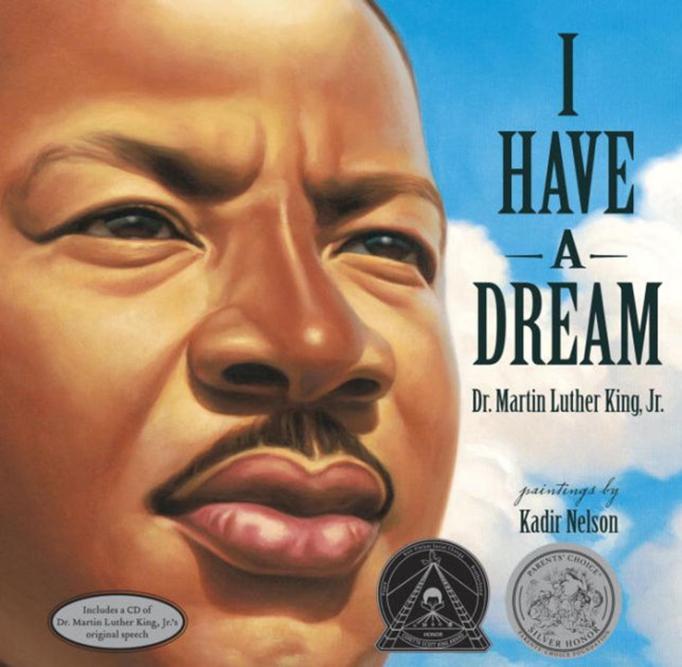 Even young children can quote parts of King’s iconic “I have a dream” speech from the March on Washington for Jobs and Freedom. It’s also played so often during MLK Day that we can all become innured to the power of the words. Kadir Nelson’s stunning illustrations help bring the speech back into focus. The book also comes with a CD parents can play after reading the book to hear King’s original speech.

Because They Marched: The People’s Campaign for Voting Rights that Changed America 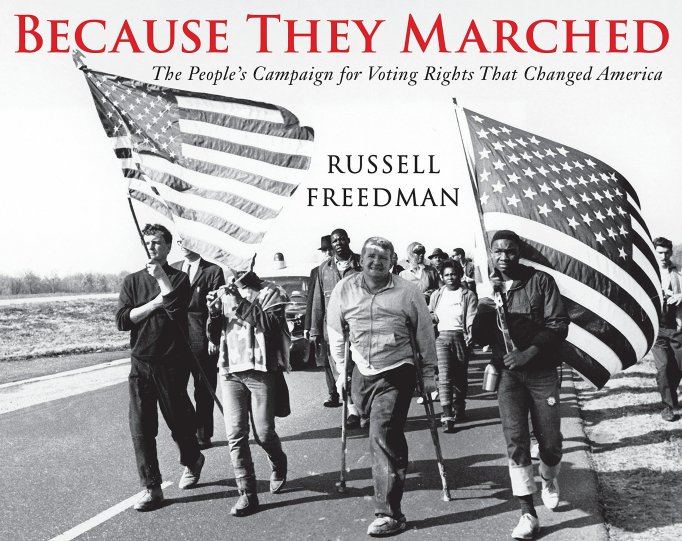 A book for middle grades, this book brings the march from Selma to Montgomery, Alabama to live with archival photographs. Written for the 50th anniversary of the Voting Rights Act, it also includes what has been done in more recent years to erode voting rights.

What Goodreads Fans Say: “Russell Freedman has become my go-to-guy for high quality expository text for all readers, but especially for middle grades. This book, like his others that I have read, presents information in a clear and concise way while engaging the reader.”

I am Rosa Parks 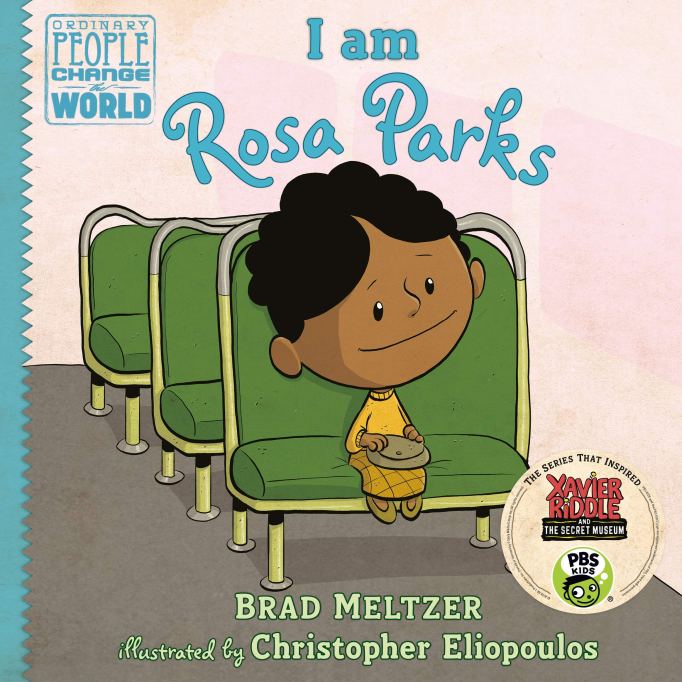 Part of the Oridinary People Change the World series, this is a great introduction to Rosa Parks and her legacy for younger children. The comics-style illustration is especially engaging for young readers.

What Goodreads Fans Say: “The mixture of text and graphic-novel-like speech clouds has been a surefire hit for all the kids I’ve shared these books with. It’s a wonderful overview and starting place for young kids on the roots of the civil right movement!”

A Sweet Smell of Roses 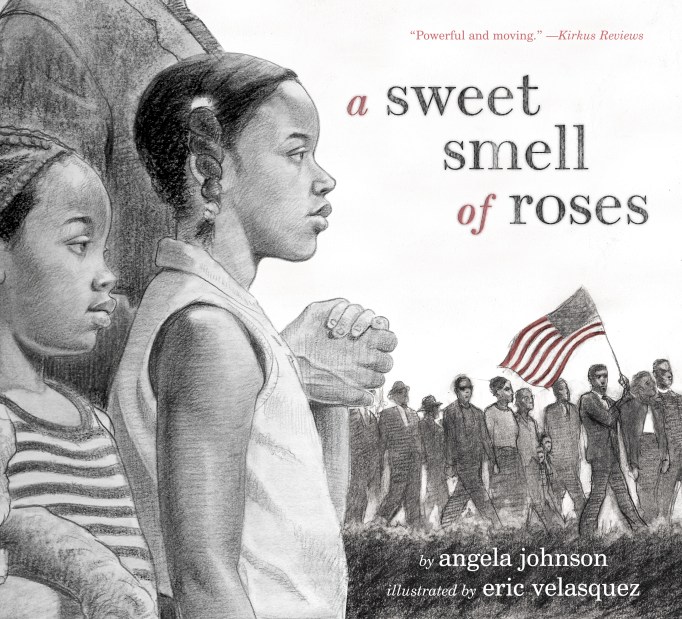 Another example of a story where beautiful illustrations make a powerful story even more effective, A Sweet Smell of Roses tells of two young girls sneaking out to join a march. The black and white charcoal drawing are only colored with hints of red and will stay with both kids and adults long after they finish the book.

What Goodreads Fans Say: “The realistic charcoal illustrations, with an occasional splash of red, are what really make this story come to life. They effectively capture the excitement, fear, perseverance and determination of the demonstrators.” 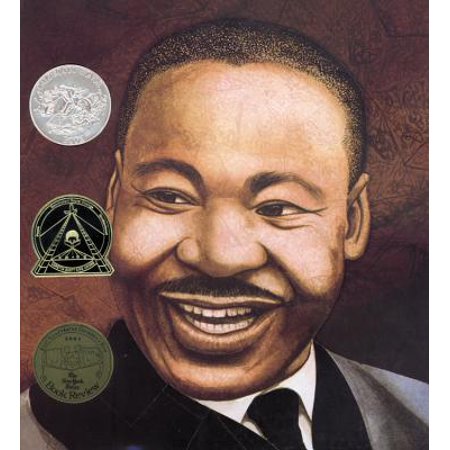 An excellent overview of King’s life and legacy, Martin’s Big Words also acts as an introduction to some of King’s most well-known speeches and writings as they are intervwoven with the narrative. The collage illustrations are also sure to capture children’s attention.

What Goodreads Fans Say: “Of the three books that we read this year about Martin Luther King, Jr. in honor of his birthday, this one was by far my favorite.” 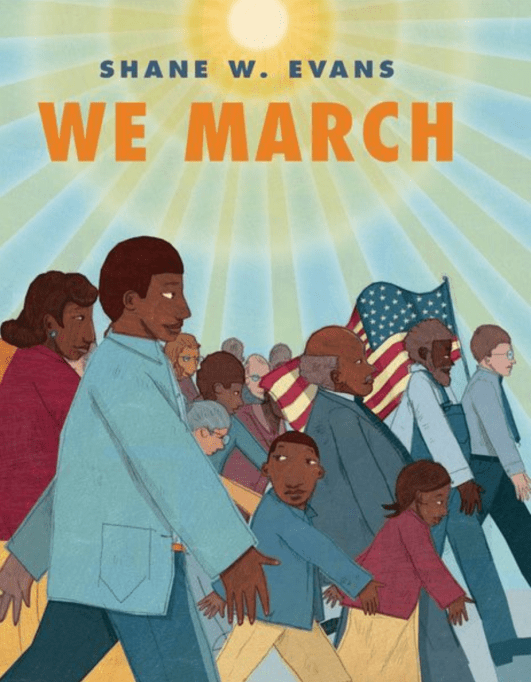 Author and illustrator Shane W. Evans uses bold, bright colors and simple, impactful words to tell the story of the March on Washington through the eyes of one family. It acts as a great introduction to the march for young readers, many of whom may be able to read it themselves.

What Goodreads Fans Say: “This is a great introduction to the March On Washington, suitable for very young children on up. The illustrations are vibrant, and Evans keeps the text super simple.”