As soon as the bookstore closed and the lights were out and the last human had left … all the books woke up, shook out their customer-thumbed pages and stretched their over-cracked spines, ohhhh yeahhhhhhhh. Then they got about their evening bookish routine. The new Ottolenghi Simple cookbook began preparing a Roasted Onion Salad with Arugula for dinner. Boy Swallows Universe began preparing to swallow that Roasted Onion Salad with Arugula. And The Subtle Art of Not Giving a F*ck just lounged about in the corner, not giving much of a f*ck, subtly. 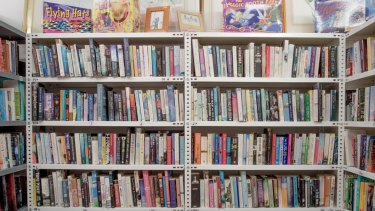 Way down the back, in the bargain book bin, a pile of ageing Book-Title-Stars reminisced about the golden days, their old covers faded and creased and plastered with discount-stickers. Credit:David Ramos

Right down the front, on the bestselling fiction table, three novels started chatting – The Tattooist of Auschwitz, The Dressmaker of Dachau and The Beekeeper of Aleppo.

"Good sales today?" asked The Tattooist of Auschwitz, and The Dressmaker of Dachau said, "Outstanding!" and The Beekeeper of Aleppo said, "Un-BEE-lievable!", immediately regretting the gag because they were meant to be harrowing tales of survival in the face of extreme adversity, and humour just didn't really feel appropriate.

The Dressmaker of Dachau said, "Looks like we're the buzz books of the moment! Everyone wants to read a novel with a Niche-Profession-of-a-Horrific-Location title! We're the current Book-Title Titleholders!"

Then she high-fived the other two, their pages making that satisfying schmack-sound you only get from quality paper stock. But The Beekeeper of Aleppo was quietly worried: he wondered about competition. What title would be next? The Podiatrist of Birkenau? The NBN LiveChat Consultant of Mosul? Anything was possible in this Niche-Profession-of-a-Horrific-Location Book-Title-Era.

Further back in the store, high up on the general fiction shelves, three other books peered down enviously: The Girl on the Train, The Girl with the Dragon Tattoo and The Girl With All The Gifts. Only a few years ago they were the Book-Title Titleholders. The It-Girls. "It's a fickle game, this book-title biz," whined The Girl on the Train. "One minute you're The Luckiest Girl Alive, the next minute you're Gone Girl, just gonnnne." Then the It-Girls started bitching about the latest bestseller The Woman in the Window, who couldn't hear anything because she was far away, she was actually in the window.

Way down the back, in the bargain book bin, a pile of ageing Book-Title-Stars reminisced about the golden days, their old covers faded and creased and plastered with discount-stickers. On the top were the Wives-Daughters-Sisters Title-Divas of the late-2000s – The Time Traveler's Wife, The Heretic's Daughter, My Sister's Keeper. Underneath were the Something-Intangible-of-Something-Abstract Title-Champs of the mid-2000s – The Inheritance of Loss, The Line of Beauty, The Shadow of the Wind. And right down the bottom of the bin, the Whacky-Overlong-Postmodernist-Title-Prizewinners of the early 2000s – The Curious Incident of the Dog in the Night, The Amazing Adventures of Kavalier & Clay, A Heartbreaking Work of Staggering Genius. Nobody talked to them much. Pretentious try-hards.

For the rest of the night, books boasted and bitched, ate and argued, discussed sustainable strategies for the independent bookselling industry and debated whether book-club members really need to eat that much cheese. Until it was morning and time to go to sleep again, ready for another big day of sales. Just then a box of books arrived at the front door. The latest bestseller: The Deliveroo-Cyclist of Mogadishu. From somewhere down the front came a mumbled "Un-f*ckin-BEE-lievable!"

Danny Katz is a regular columnist.