It’s peak holiday shopping season and Amazon’s Cyber Monday sale is here, with toys among the discounted items. This is also fantastic news for your kiddos, who probably have already shoved revised holiday wish lists into your hands.

There are toy deals for kids of every age, all the way from newborns to teenagers, so you can find something for everyone on your list this year. There are even games and building sets that you, as a parent, might enjoy playing or making with your kids.

However, you have to act fast or these toys might not make it home in time for the holidays. The deals below aren’t necessarily disappearing, but when an item goes out of stock, Amazon pushes out the date that you’ll receive it by. In some cases, that date could be after the holidays, and these toys might arrive on your doorstep in January. That might not be a dealbreaker, but just something to keep in mind while you’re browsing. 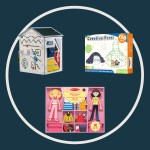 These 10 Toys Will Keep Kids Busiest the Longest

If your kid loves LOL Surprise Dolls, they’ll go bananas over this gift set. This plane can transform into a car, recording studio and mixing booth.

Your little one will love having their own special place to play in this bright pink tent. This tent includes glow-in-the-dark stars and can be used indoors or outdoors.

This is no ordinary robot — the programmable bot can communicate with a “gesture-sensing function” on its chest which allows it to obey your kids’ commands. Capable of walking, singing, and dancing, the toy will substitute nicely for kids who love bossing around their younger siblings.

The good news for kids: this hand-operated drone lights up as soon as it’s thrown in the air. Even better news for parents: The item is protected by a shell which helps prevent damage to walls and furniture in the event of crashes. Suitable for kids ages eight and up and kids at heart like us.

Check out these charitable and sustainable toy brands.