On a day that feels almost as surreal as the very day it happened, families are reflecting on the 10-year anniversary of the Sandy Hook Elementary school shooting.

The December 14, 2012 tragedy is forever etched in the United States’ history as one of the far too many mass shootings orchestrated and carried out by a young, mentally-ill white man who had access to firearms when he shouldn’t have. 20 first-grade students and six adults were murdered before the 20-year-old ultimately took his own life — a lifetime’s worth of horror for the victims’ families that began and ended in the span of just 10 minutes.

10 years later, parents who lost their children to gun violence are reflecting on that devastating day — namely Nicole Hockley and Mark Barden, the parents of victims Dylan Hockley and Daniel Barden. The duo founded Sandy Hook Promise — an organization dedicated to educating and empowering people of all ages to prevent violence in schools, homes, and communities — and they opened up about the anniversary during a somber interview with ABC News.

Hockley admitted, “Honestly, I find it hard to wrap my head around the fact that it’s been 10 years since I last held Dylan. Time has become very surreal in the last decade because, for me, he is still my 6-year-old boy, and I think about him every day.”

She continued, “While his older brother has grown and is taller and is now 18, Dylan is still … That day, and he’s still in that moment. So much has happened, but I still can’t wrap my head around it,” Hockley explained.

Barden agreed with Hockley’s thoughts, saying, “Time has warped. It feels like maybe Daniel is just in the other room, and my family and I are continually having to wrap our head around the fact that this happened and that Daniel is gone forever.” 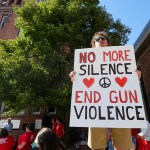 Gun Deaths in the U.S. Have Skyrocketed, Especially Among Women

Expressing her disgust about the CDC’s 2020 statistic of guns being the number one cause of death in kids and teens in the US, Hockley said, “I think it’s horrific, and I think that if that doesn’t send a message to people that we’re not doing enough to keep kids safe, then I don’t know what else will get through.”

For their part, Hockley and Barden are doing absolutely all they can, and encouraging others to do the same through their organization. Since its inception, Sandy Hook Promise has expanded — including not only actionable programs for schools that teach kids and educators alike to recognize the warning signs that precede acts of violence, but a sister organization, Sandy Hook Promise Action Fund, that works to change legislation. Its two-pronged approach tackles gun violence head-on, from both political activism and campaigns to trainings and clubs that lead to safer schools from within.

“Research has proven that Sandy Hook Promise’s Know the Signs programs effectively teach youth and adults how to prevent school violence, shootings, and other harmful acts,” says the website. “Students and educators learn how to identify at-risk behaviors and intervene to get help. These early-prevention measures empower everyone to help keep schools and communities safe.”

Still, Hockley acknowledges that there’s a long way to go, and much work to be done. “If [guns are] the number one killer of youth under the age of 19 … we’re doing something drastically wrong as a country, and our children deserve so much better.”

Read here for a list of actions you can take to help prevent gun violence and tragedy.