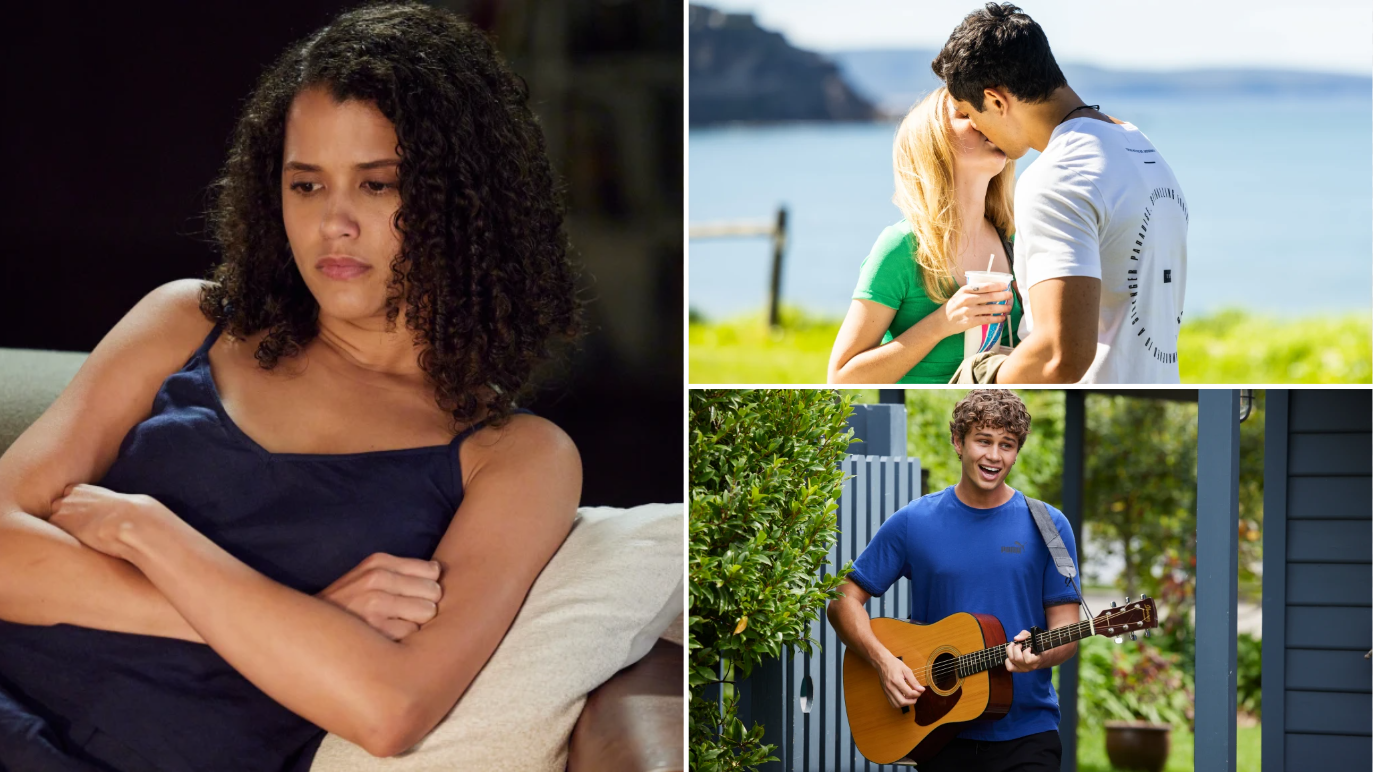 This week on Home and Away, Theo (Matt Evans) and Kirby (Angelina Thomson) are excited to have their secret relationship, but the obstacles keep on coming. First, Justin (James Stewart) catches them together at the house, and he is sworn to secrecy.

Then, during a Salt gig, Justin tells them they’re being way too obvious on stage. As if that weren’t enough, Remi (Adam Rowland) encourages Theo to flirt with another woman – and Kirby dares Theo to kiss his admirer…

Meanwhile, Ziggy (Sophie Dillman) and Dean (Patrick O’Connor) return to the Bay after their road trip, but Ziggy struggles to return to reality and can’t stop thinking about the surfing competitions she wants to be pursuing. She begins to feel bitter about her responsibilities in the Bay and realises she could be happier if she was chasing her dreams of being a pro surfer. Seeing her struggles, Dean realises he may have to give her the push she needs and let her go…

Here’s what’s coming up for the week beginning Monday October 3.

Justin catches Theo and Kirby together

When Theo finds out he’s got the house to himself, he immediately invites his secret lover Kirby over. When she gets his text, she rushes out of the house with poorly-formed excuses – leaving Remi and Eden bemused. When Kirby arrives, Theo’s keen to get down to business, but she wants to lay down some ground rules – they can’t show any affection in public, especially when they’re doing gigs together. Theo agrees and the pair head to the bedroom. Later, they’re hanging out in the kitchen when Justin arrives home earlier than expected, walking in suddenly and springing Theo in his boxers! Horrified, the new couple beg Justin to keep their secret romance under wraps, but how long can they keep hiding their feelings?

Nikau is trying to move on from his heartbreak over Bella, but he’s still got the bikie gang court case hanging over his head. As he complains on the beach about not having a court date yet, he’s overheard by newcomer Heather who saunters over in her bikini. Nikau is taken aback by her direct approach as she swiftly invites him to the Lyrik gig at Salt that evening, and he finds himself agreeing without a second thought. That night, the pair hit it off, and as Nikau grows in confidence he invites Heather back to his place…

Cash moves in with Felicity and Tane after leaving hospital?

Cash has been stuck in hospital in the aftermath of his shooting, and he’s determined to get out of there. However, Bree isn’t convinced he’s ready yet. Cash is persistent, and Felicity decides to keep the peace by spending the night with him. In the morning, Felicity realises Cash isn’t getting any sleep at the hospital and suggests to Bree that her brother carries out a care plan at home. Bree agrees, but Felicity realises it may not be a good idea to have him go back to Irene’s place now that Jasmine has gone. She asks Tane if her brother can move in for a while – but will her boyfriend go for the idea?

Is Heather dangerous as Marilyn finds an omen?

Heather is making herself more of a permanent fixture in the Bay, having regular tutoring sessions with Roo and striking up a casual relationship with Nikau. However, Marilyn continues to be wary of the newcomer and tells Irene she’s got a bad gut feeling about the girl. Irene dismisses Marilyn’s concerns and gives Heather a room for the night when she learns she has nowhere to go until the next day. To Marilyn’s horror, Roo then gives Heather a key to a caravan. Marilyn turns to her tarot cards and is shocked to discover an omen. She takes her findings to Roo, but her best friend begins to lose patience with her…

When Rose finds out that Cash has been discharged from the hospital, she’s furious and believes it’s medical negligence on Bree’s part. Filled with concern for the man she secretly loves, she confronts Bree about her decision and doesn’t hold back, speaking her mind. However, Bree is self-assured when it comes to her professional medical decisions and tells Rose that she won’t be told how to do her job. She insists that Cash can complete his recovery at home with his sister, leaving Rose feeling rudely cut out – doesn’t she realise that she and Xander are Cash’s family, too?

Cash decides to cut Rose and Xander out of his life

Felicity is concerned when Cash is officially discharged from hospital. He goes straight to his room and doesn’t want to engage with anyone. Later, she finds him holding the engagement ring he was going to give Jasmine, and realises the depth of his struggles. As he processes what his life will look like moving forwards, Cash makes a decision and tells Rose and Xander he’s decided to cut them out of his life so he can move on from Jasmine. Gutted, Rose wonders why she should stay in Summer Bay at all…

Dean and Ziggy have been enjoying their surfing road trip, but they’re forced to cut it short when Amber tells Dean that Jai is going to participate in a footy gala. Ziggy is glad they got time away, but struggles to get back to the reality of another day in the garage – especially with Justin gushing over Lyrik and Dean gushing over Jai. She begins wondering if this is the life she wants – she could easily be on the coast, chasing her pro surfer dreams. As Dean watches his girlfriend struggle, he realises he might have to encourage her to leave the Bay and seek the life that will make her happy.

Theo kisses another woman in front of Kirby?

Remi, Kirby and Theo are hanging out in Salt, but when Remi goes to the bar, Mackenzie asks how long his bandmates have been together. Remi says they aren’t, but Mack isn’t convinced. The pair decide to place a wager on whether the pair are together, and Remi tests the waters by inviting Theo to go and flirt with an admiring woman at the bar.

Kirby eggs him on, realising it could give them cover. Theo is uncomfortable, but goes along with it. As he talks to the woman, he gets a text from Kirby, telling him to kiss the woman. Will Theo kiss someone else just to keep his relationship with Kirby secret?