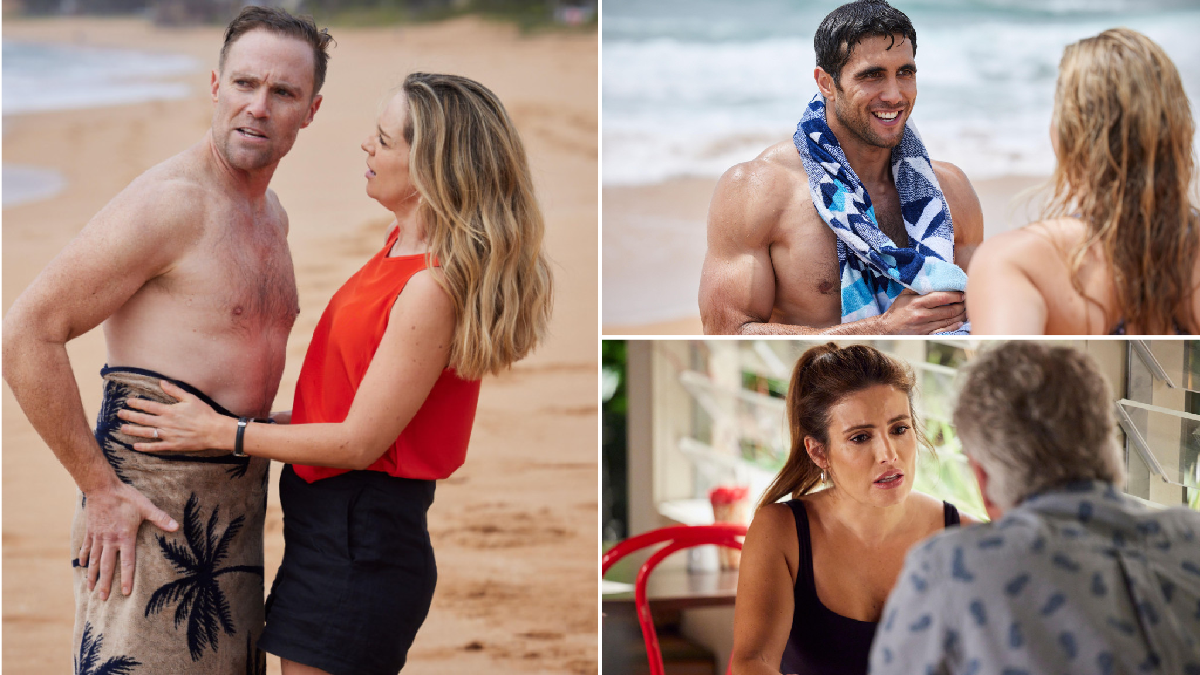 This week in Home and Away, Leah makes a risky decision when she decides to go up the coast in the hopes of tracking down Susie. While Justin is concerned for his partner, he copes with his emotional turmoil by taking increasing amounts of pain medication.

Meanwhile, Dean and Amber call it quits for good after he makes a confession, and he is left in the Bay to pick up the pieces when Mackenzie calls him up in a drunken stupor.

Elsewhere, Tori’s concerns for Christian grow when she finds him running out of the ocean completely naked, and Nikau faces pressure in the city when Sienna forces him to attend some events he isn’t comfortable with.

Here’s what’s coming up on Home and Away for the week beginning Monday 7th June.

Leah insists on following a lead to find Susie

Leah has been avidly following scammer forums online in the aftermath of Susie, and after connecting with several others who also suffered at Susie’s hands, she finds a potential lead – someone believes they have seen Susie further up the coast. Leah immediately decides to follow the lead and persuades John to drive up the coast with her. Justin and Irene try to talk her out of it, saying it isn’t safe and Susie is a loose cannon, but will she listen?

Dean and Amber have been struggling in the aftermath of the surf competition, when Ziggy and Dean’s win forced her to see the pair together and realise that Dean likely still has feelings for his ex. When the pair finally have the difficult conversation, Dean admits he’s still in love with Ziggy and Amber says they can’t be together anymore. Dean’s heart is broken as he is forced to say goodbye to Jai and he moves to Queensland with his mother…

Ziggy barrels into the gym in a stormy mood, ready to take out her emotions on a punching bag. Mia takes it upon herself to get Ziggy to talk, and she is surprised when Ziggy reveals that Tane said he loves her. She tells Ziggy that this isn’t Tane’s usual behaviour, as he is usually all about the one night stands. As Ziggy realises that she is possibly the first person Tane has ever been serious about, will her turbulent emotions begin to subside?

Dean finds a drunken Mackenzie causing chaos in a motel

Mackenzie has been missing for a few days after making a drunken move on Tane and having Ziggy kick her out of their house in response. Dean tries his best to get hold of her, and he eventually gets through to her. Realising she is heavily drunk, he goes to where she says she is and finds her in a motel, piling on the booze and playing loud music. After a noise complaint comes through to her room, Dean asks her – how much further is she going to go with her destructive spiral?

Ari puts Ziggy on the spot in surprise confrontation

Dean is surprised to learn that Ziggy kicked Mackenzie out for making a move on Tane, and when Ziggy asks him why he isn’t doing the school run he is forced to make an excuse. Later, Dean confides in Ari about Jai and Amber leaving and Ari relays the information to Tane and Ziggy. When Ziggy learns the news, she goes to the Pier Apartment to see Dean and he admits his relationship broke down because he’s still in love with her. Back at the Parata house, Ari has some choice words for Ziggy – why does she always run off to be with Dean when she’s with Tane?

Sienna forces Nikau into events he isn’t comfortable with

Nikau has been both excited and nervous after discovering he booked a photoshoot with a big client, and these feelings rise when he and Bella are picked up in a stretch limo and taken to a grungy industrial warehouse in the city for the shoot. After a hectic day, where Nikau is constantly forced out of his comfort zone, all he wants to do is go home, but Sienna tells him he’s expected to attend an after party. Bella tries to intervene on Nikau’s behalf, but to her surprise, Sienna is hardline – Nikau signed a contract, so now he will do what she tells him to…

Justin has been regularly taking pain medication in recent weeks due to his chronic back pain, and his physical health has been put to the side by Leah as she obsesses over tracking down Susie. When Leah reveals she’s going up the coast with John to try and catch Susie, Justin goes home in a mood and takes medication. Later, he arrives in a much better mood for his physio, having taken his pills – but Alf and Irene express their concern about Justin, saying they believe the trip to find Susie has triggered something in him…

Tori has been bemused with Christian’s behaviour in recent days, as he begins to research near-death experiences and goes for an impulsive fully-clothed swim in the ocean with Jasmine. When Jasmine joins them for dinner, Tori is annoyed when both she and Christian begin enthusing about the merits of tarot readings. Her annoyance turns to concern when she can’t find Christian in the morning, and she is horrified when she walks down to the beach to find him naked in the water!