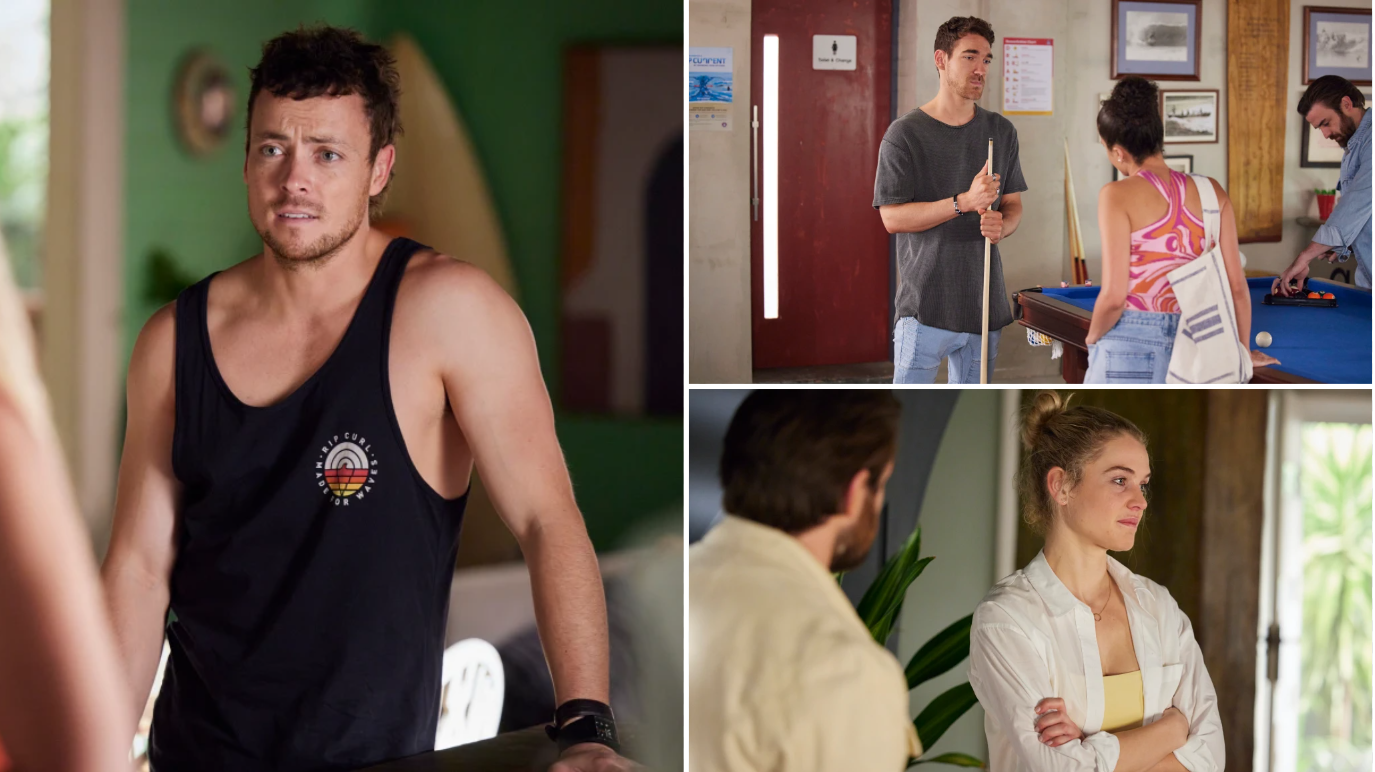 This week in Home and Away, Theo (Matt Evans) is furious when he sees a text from Bob (Rob Mallet) pop up on Kirby’s (Angelina Thomson) phone. Why is his girlfriend texting with her ex?

However, when he confronts her about it, she insists she’s done nothing wrong and instead gets angry with him. She then makes plans to meet up with Bob, but as both Theo and Eden (Stephanie Panozzo) make their disapproval clear, how much is she risking for the man who broke her heart?

Elsewhere, Ziggy (Sophie Dillman) is ready to get stuck into work now that her morning sickness has eased off, but she is suddenly plagued by terrible abdominal cramps. Dean (Patrick O’Connor) immediately recommends she goes to the hospital, and as she is rushed over there, she begins to worry – what if something is wrong with the baby?

Here’s what’s coming up for the week beginning Monday, January 9.

Lyrik’s music video is only getting more popular with time, and Theo is loving all the positivity online. However, he can’t help but notice Kirby is subdued. Are the trolls she mentioned getting to her? However, when Kirby leaves her phone on the table, it flashes with a notification and Theo notices it’s a text from Bob. His heart skips a beat – why is his girlfriend texting her ex? He bites his tongue, waiting for her to confess, but he’s quietly fuming…

Cash and Eden are forced together during wedding planning

Wedding planning is officially underway, but it soon becomes clear that Felicity and Tane have wildly different ideas. Felicity wants an epic party, while Tane wants a traditional Maori ceremony. However, Felicity does stick with one tradition – asking Eden to be her Maid of Honour. She then awkwardly asks if Cash would walk her down the aisle. With both ex-lovers now playing big roles in the wedding, Cash and Eden soon find themselves at a wedding planning gathering. The tension rises until Felicity is forced to intervene…

Marilyn is discovered – but does she want to come home?

Marilyn has recently left the Bay after her long-last daughter, Heather, took her hostage along with her friends. Alf asks Cash to find her, but when the cop won’t reveal her whereabouts, Alf is furious and Roo follows up by pleading – they just want to support Marilyn. Reluctantly, Cash reveals that Marilyn is in the city, and Roo goes to find her with Nikau in tow. They discover her volunteering at a youth shelter, but Marilyn is adamant – she doesn’t want to come home…

Ziggy is rushed to hospital after abdominal cramping

Ziggy is finally free of her pregnancy morning sickness, and she’s ready to start living her normal life again as much as possible. With her new role as manager of the garage, she is keen to get stuck in. But just as she starts, she is struck with severe abdominal cramping. She tries to brush it off, but Dean is having none of it and insists she goes to hospital. Is something wrong with the baby?

Justin loses patience with Ziggy as the garage struggles

Justin has left Ziggy to open the garage and take care of business, but he is confused and annoyed when customers begin calling him. They want to know why the garage isn’t open? Justin wonders where on earth Ziggy got to – why isn’t she at work? Little does he know Ziggy is in the hospital, but when he goes to find her later he is furious when Ziggy merely tells him that she forgot to open up. Justin begins wondering if he made a mistake giving Ziggy a promotion…

Jacob has been staying with Bree in the Summer Bay motel room, and his violent behaviour has been taking its toll on not just his wife but also Remi, who is worried sick about her. To make matters worse, Jacob begins hinting he’s sick of being away from her for months at a time and working in the mines. He suggests he stays in the Bay, much to Bree’s horror. She can’t take being hurt by him much more and was counting down the days until he left. Is she about to be stuck with him indefinitely?

Xander picks up a hot date after a bet with Rose

Xander and Rose haven’t been lucky in love thus far during their time in the Bay, but after Xander pranks Rose by installing a dating app on her phone, Rose decides to get revenge. During a competitive game of pool in the Surf Club, Rose spots a woman checking Xander out. She suggests a wager – if she wins the game, Xander asks the newcomer out. If Xander wins, she will ask a guy out from her dating app. The bet is on, and Rose plays well. She is victorious, so Xander shrugs and heads over to the woman. Is his love life about to pick up?

Remi has been consumed by anxiety since Bree’s violent husband, Jacob, returned to the Bay. When he overhears Jacob’s plans to stay in the Bay, his anxiety peaks and he leaves a note with Cash to contact him.

He then runs around town looking for her, attracting attention with his seemingly obsessive behaviour. When he gets home, he’s about to give up when he spots Bree sat on his doorstep in floods of tears. As he holds her in his arms, will their newfound closeness lead to romance?