Knowing when to prune roses has to be one of the most common gardening quandaries of all time. To some less experienced gardeners, it might seem unimportant when and where you decide to make that cut. However, the moment you choose to prune your roses can be the difference between a healthy long lasting plant that produces multiple buds and flowers, and one that might not last the winter. In a video for Ebury Reads, Alan Titchmarsh reviewed how to make roses last for as long as they can by pruning a certain way.

Pruning is vital to the health of the rose bush, it helps prevent disease by removing areas that may harbour infestations and also encourages flowering.

Roses may look stark after a good pruning, but roses grow very prolifically and will fill in quickly.

The basic principles of pruning roses are the same as pruning anything else: cutting back hard will promote the strongest growth, while light pruning will result in less vigour.

The other basic rules include cutting to an outward-facing bud to prevent compacted growth and removing closely positioned stems that might rub or compete for space. 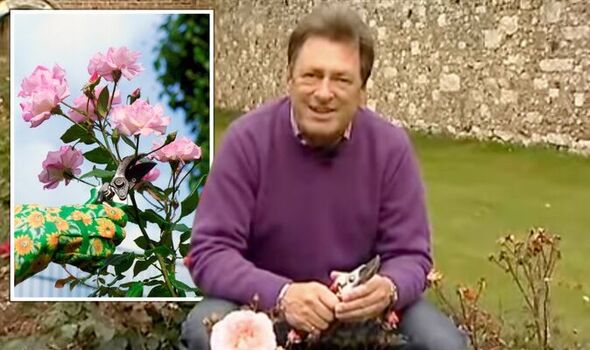 Also remove stubby “snags” (short, dead lengths of stem with no growth on them) and thin, twiggy stems, which are unlikely to produce anything worthwhile in terms of growth and flowering potential.

In the YouTube video, Alan said: “When you see a rose like this in full bloom you realise why gardens simply can’t do without them, not just for their appearance and their colour, but for their scent as well.

“The trouble is that the flower is eventually going to look like this [brown and dying] and then what do you do? Well, the answer is simple, you cut it off.

“With single flowers like this, you can just take them off with that tiny bit of stem they’ve got behind them. But sometimes what you will also find is that they just fall off and it’s much, much tidier.

“But if the cluster flower grows like these with this great head here, which has disappeared, then you’ve got to go back much, much further but always make your cut just above a leaf.

“By cutting into a stem, which is at least pencil thickness, you’ll make sure that that bud there, which grows having come from a fatter stem, is much more vigorous and capable of carrying more flowers later on into the year.”

Bush roses include cluster-flowered floribundas and large-flowered hybrid teas, and have been bred for their ability to flower freely on strong new growth made during the current growing season.

This means they can be cut down hard every year to keep plants compact. 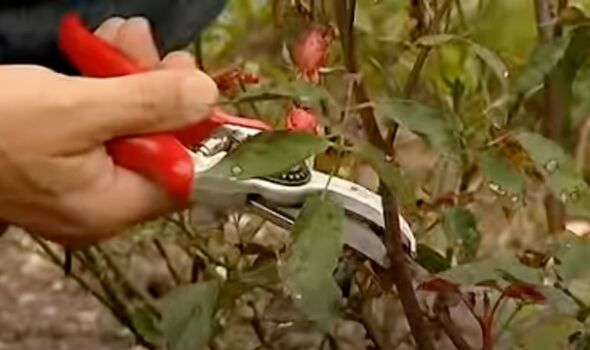 However, before gardeners follow Alan’s pruning tips, it is important that they use clean tools for this task as roses are susceptible to disease through open wounds.

Make your cuts up to 5mm above an existing bud with clean, sharp gardening secateurs. Any closer than this and your plant might find it difficult to produce new growth from this stem.

It is good to angle the cut away from the plant as this prevents rainwater from dripping towards it and collecting to cause disease.

Alan then went on to show viewers a rose bush that has started to develop a disease. He said: “Now what you also notice with this bush is that the leaves are covered in spots. 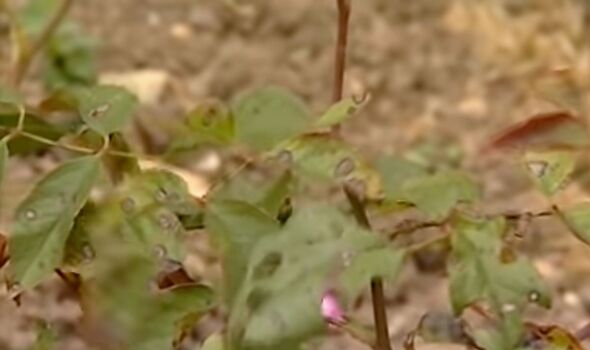 “This is black spot – very well named because that’s what they are. It’s a fungus disease. It’s particularly prevalent on poor soils where roses are under stress and also on roses with thin leaves.

“You’ve got to spray regularly to control it on roses that catch it badly.” Once gardeners see the telltale signs of black spot, they can’t reverse the disease but they can stop the spread of infection to new leaves.”

You could spray against black spot with a fungicide. Follow the instructions, treating the new foliage in early spring, with further sprayings at regular intervals through the season.

Instead, Alan advised: “Better by far I reckon is to look for plants like this, here’s a rose with not a place spot on it. Its leaves are much thicker, much more leathery, they need no spraying at all, it is naturally resistant.

“When the faded flowers are whipped off you end up with a bush you haven’t sprayed at all, but which looks absolutely perfect.”