With his endlessly youthful energy, Warnie seemed immortal and was certainly a man of immortal sporting achievement. His sudden death from a heart attack at 52 has been a wake-up call for many men in their 40s and 50s. Less than a week later, Labor Senator Kimberley Kitching’s death from a suspected heart attack, also at 52, has put a spotlight on heart health in middle age.

If you’ve never exercised or you’ve lost fitness, can you change anything by starting today? Is there a safe way to do it and what real difference can people make to their health and hearts in mid-life? 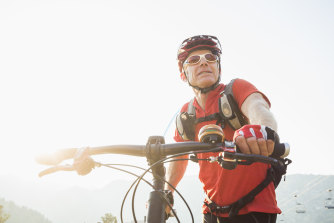 The answer is that we can change the course of our lives even if we’ve not looked after our health until now.

The average age for a first heart attack is 65.6 years old for men and 72 years old for women, but heart attacks are increasingly common in younger adults as well. In 2018, there were an estimated 58,700 coronary events in Australians aged over 25. Two-thirds of those occurred in men. None of this, however, is writing on the wall.

“It’s never too late to start being physically active and to reap benefits from this lifestyle change,” says Professor Anne Tiedemann, who leads the healthy ageing research at the University of Sydney’s Institute for Musculoskeletal Health. “Even small increases in physical activity are associated with health benefits, both in the short and long term.”

In fact, the people who get the most benefit are those who go from being sedentary to starting regular exercise, says Tony Blazevich, a professor of biomechanics at Edith Cowan University.

“When our fitness levels are low, we get massive health benefits from increasing our fitness levels by just a little bit,” says Blazevich, who is also the director of the Centre for Exercise and Sports Science Research. “So, choose any physical activity you like, from walking around a park or the shops, to parking further from your office, to riding a bike, digging in the garden, or starting those gym or swimming classes you always wanted to, and then get stuck in.”

The benefits include reduced risk of heart disease, stroke, diabetes, some cancers like bowel and breast cancer, dementia and depression. There is also improved mood and mental health as well as physical fitness.

“The key is regularity and finding something you can do consistently,” says Dr Erin Howden, the head of the human integrative physiology lab at the Baker Heart and Diabetes Institute. “Exercise doesn’t have to be on a treadmill or a bike.”

Exercise is just one piece of the puzzle – smoking, alcohol misuse and an unhealthy diet are the other three major risk factors for non-communicable disease (heart disease, stroke, cancer and diabetes) – but it is an important piece.

“Research has shown that even in people who smoke or are overweight/obese, increasing participation in physical activity does actually reduce the risk of developing heart disease and is associated with prolonged life,” Tiedemann says. “This is good news for people who may struggle to change other modifiable lifestyle factors.”

In short, as Howden puts it: “You’re more likely to live longer and live free of disease.”

This matters when only about 13 per cent of 45-55-year-olds and 11 per cent of 55-64-year-olds in Australia meet the physical activity guidelines.

In one small 2018 study, led by Howden, sedentary middle-aged adults were put on a two-year exercise program. Over time, their hearts became less stiff, which can provide protection against heart failure.

“The heart of someone in their 70s who has exercised over a lifetime looks like a sedentary 20-year-old,” Howden says. “If you haven’t exercised, starting in middle age is a good time because the heart retains some cardiac plasticity at that point and … you can actually reduce the cardiac stiffness of the heart by exercising four-to-five days a week for 30-60 minutes.”

Howden suggests a visit to the GP for a heart health check for those who haven’t been exercising regularly, but “if you want to just get started with general walking, it’s safe to do that.”

From there, for maximum bang for buck, “just like our diet, a physical activity plan that’s rich in variety has the biggest benefit”, Blazevich says: “Remember, accredited exercise physiologists are Medicare-claimable allied health professionals, and many people get one or more visits for free under their current private medical insurance.”

For those who haven’t been exercising regularly, visit your GP for a heart health check before commencing a new fitness regime.

Tiedemann adds: “Once we hit about 60 years of age it’s important to do balance challenging exercise to reduce the risk of falls.”

As for the intensity, doing the same thing is fine for maintenance, but Tiedemann says that to see improvements in fitness or strength, there needs to be an element of challenge.

The dose does make the difference, Howden agrees: “When you’re exercising, if you can speak easily you might need to up the intensity. Being breathless, huffing and puffing is a normal response.”

Although beginning in middle age can help our health and longevity in the long term, the best part about it might just be that it improves our wellbeing immediately.

“[It] creates a habit that we can stick to for life,” Tiedemann says. “Much like brushing our teeth twice a day.”