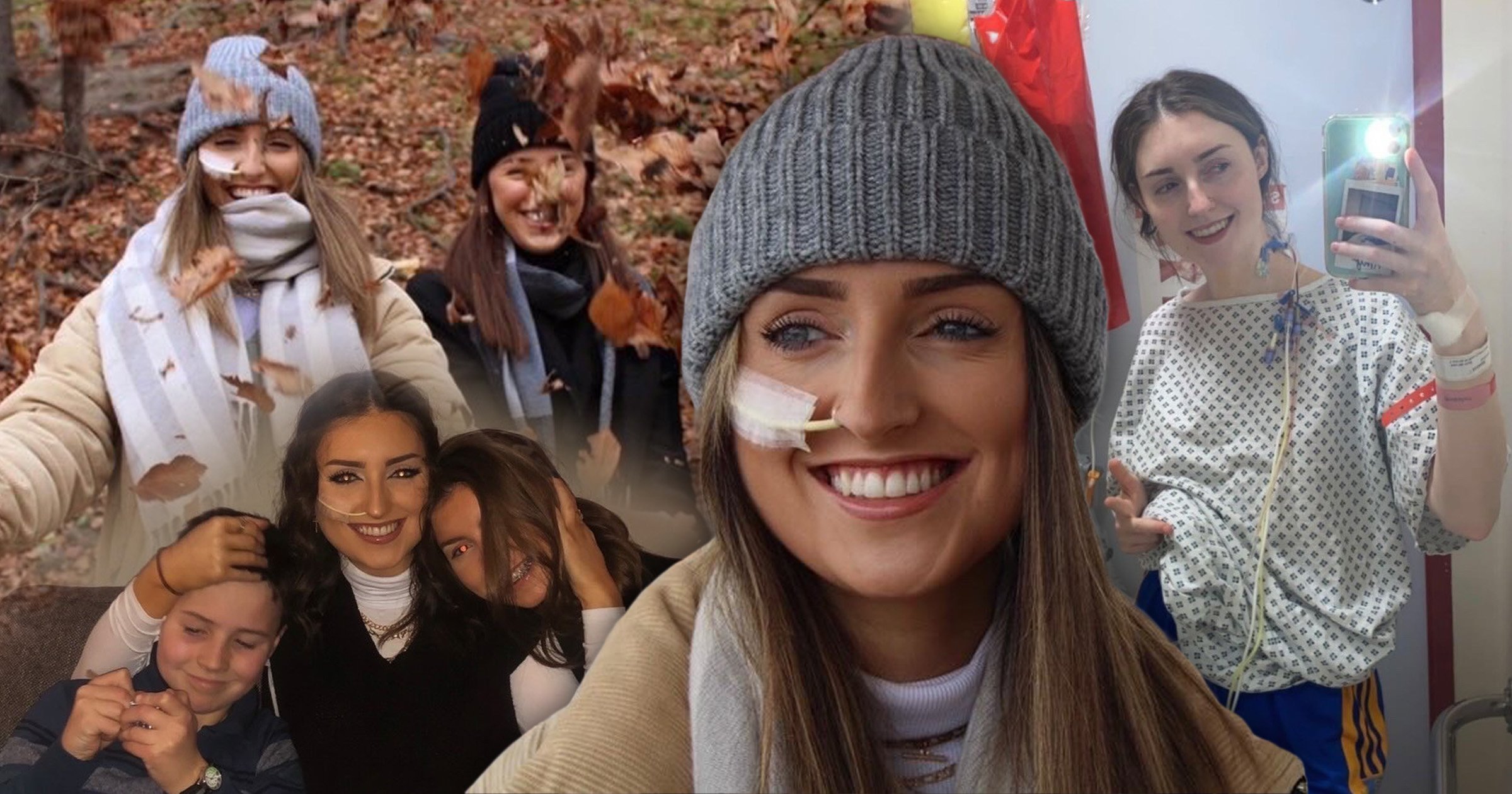 When you are 17, worries should be few.

School, friends, boys, girls and the odd spot preoccupy your mind from time to time, but mostly it’s untroubled.

At 17, you shouldn’t find yourself sitting in a hospital room fighting for doctors to listen.

Unfortunately, at 17, this is just what Amy McNeill had to do.

From County Roscommon in Ireland, the teenager was living life as best she could. A keen sports competitor, she filled her weeks with football, volleyball, school and friends. However, after a bout of glandular fever, things started to change.

‘Unlike other people, the glandular fever didn’t affect my throat, it was actually my stomach,’ the now 19-year-old tells Metro.co.uk. ‘It was really sore and swollen all the time.

‘It settled for a few months but then after a while I started to get sick after eating. It was no longer just a stomach pain.’

The issue worsened, with Amy spending long periods in hospital, but doctors couldn’t figure out what was wrong.

‘There is a tiny hospital where I’m from in Roscommon and they tried their best by giving me fluids but I eventually had to go elsewhere to other hospitals and clinics, but no one could tell me what the issue was,’ she says.

The psychology and children’s studies student describes this period as ‘the worst experience of my life’.

Doctors were accusatory, stating she had an eating disorder and was not admitting it.

‘They put everything on me,’ she says. ‘They told me I had an eating disorder. I think because they couldn’t figure out what was wrong with me that they switched to that as a default because I was 17 and losing weight.’

Doctors then found an anti-sickness medication that enabled Amy to eat for a time. She returned to school and her studies, working tirelessly during the summer to catch up on the months she missed.

Sadly, the condition returned and she struggled to even keep water down.

‘It got bad again and I couldn’t keep any food down,’ she explains. ‘I went to my GP and again the eating disorder theory was mentioned.’

On return to the hospital in Roscommon a doctor there mentioned a medical professional in Dublin who deals with rare cases. At this stage, Amy and her family were willing to try anything.

Within two days of meeting him, a diagnosis was finally made.

‘After a CT angiography I was diagnosed with Superior Mesenteric Artery Syndrome (SMA),’ Amy explains.

‘When the doctor came in and told me I couldn’t believe it. I was relieved. It was never in my head.’

Superior Mesenteric Artery Syndrome (SMA) is a rare digestive condition that occurs when the duodenum (the first part of the small intestine) is compressed between two arteries (the aorta and the superior mesenteric artery).

This compression causes partial or complete blockage of the duodenum. Amy’s doctor has only seen three cases in his career.

She believes her glandular fever may have caused SMA to develop.

‘I lost weight with the illness and then I obviously lost more with SMA and they think both are connected in some way,’ she explains.

With her condition, Amy wears a feeding tube as it is an easier way to digest food. While she can handle small bites, eating is a balancing act and has to be spaced out accordingly alongside water.

‘I’m hungry all the time so it’s really hard,’ she says. ‘If I was to eat a big bowl of pasta, I’d be ok for the first 15 minutes but then I’d feel this pressure and start to feel sick. How much I eat determines how sick I will be.’

Last summer, Amy underwent surgery to rectify the issue and while it appeared to have worked for a few weeks, the issues returned.

‘I was in hospital for a month and then they decided to put the tube back in,’ she says. ‘They want to do the surgery again and hope that will be the eventual final fix but I want to wait until I finish college.’

Amy visits the hospital monthly to have her feeding tube replaced but says these visits can be anxiety-inducing because of her experience.

‘Before I was diagnosed, I really started to question myself,’ she explains.

‘I was 17 and on my own in rooms filled with doctors telling me that I had a disorder.

‘I knew I didn’t, but at some point you do question your own mind and wonder if it’s playing tricks on you.

‘When you are young you think a doctor will know how to fix you but that didn’t happen for me.

‘I’m at a stage now where I care what they think of me because if I speak up they might think I’m faking or that I’m young and know nothing.

‘It scares me because it has happened to me before.’

Amy now understands how important it is to stand up for yourself, and urges anyone who believes there is something wrong to fight for a diagnosis.

Having been through the system herself Amy has wise words for those in similar positions.

‘Write it down,’ she says. ‘I wrote everything down and when it came to meeting doctors it helped me explain everything in a more coherent way. It takes courage and it can be exhausting but you need to keep pushing.

‘Have people around you who you can talk with and who will support you and back your corner.

‘And remember, know one knows your body better than yourself.

‘So stand up, speak out and fight for those answers.’