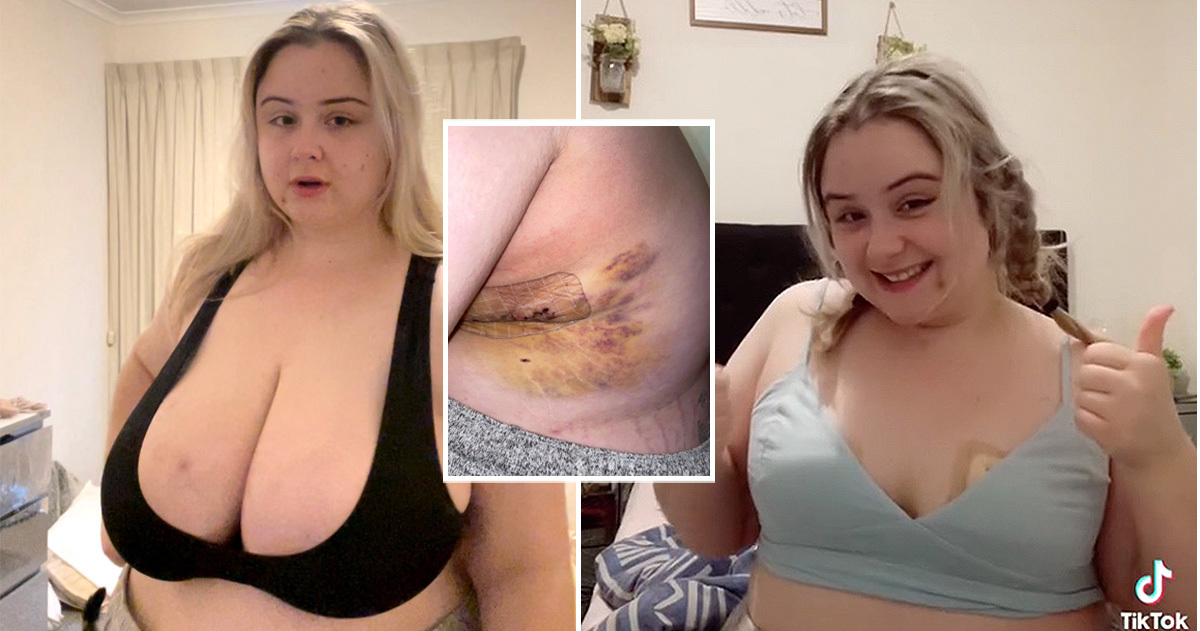 A woman with 44GG breasts has gone under the knife to get nearly 5kg of fat removed from them.

Christina Schembri, 25, from Melbourne was in constant pain and suffering with sadness and depression as a result of her large breasts.

The size and weight of the carer’s breasts made even simple everyday tasks, such as cleaning the house, difficult or impossible and left her with severe back problems, even leading to her being sent for a scoliosis x-ray.

Eventually, Christina decided ‘enough is enough’ and underwent reduction surgery in June 2021, with doctors reducing her cup size to a 38C.

‘My big breasts made me depressed,’ Christina told NeedToKnow.online.

‘Women who have smaller breasts don’t understand why, but you’ll never know until you have the size I did, how they get in the way of (literally) everything.

‘I couldn’t do simple chores like vacuuming or mopping, as my back would start to ache, and I had to sit down and stretch.

‘I could only work short hours due to the pain and needed to see an osteopath every few weeks. They made me feel bigger than I was and felt very unattractive, and constantly drained physically and emotionally.

‘I feel like my breasts were hiding my true self underneath it all.’

Not only did Christina have to deal with the physical side effects, there were social struggles, too.

She had to constantly deal with comments from men – which would leave her feeling frustrated.

Christina also struggled to find clothes to wear and claims that she would often suffer from friction sweat cysts, from where her bra would rub on her skin.

‘When I saw men’s comments I got frustrated, as they had no idea and will never know what it’s like to carry weight on your chest 24/7,’ she explained.

‘Some men have messaged me [since the reduction] and said I shouldn’t have had the surgery.

‘To have people give you looks every day made me feel gross and uncomfortable in my own body, and when people stared I got more and more insecure.

‘Before surgery, even with normal clothing, I would get a lot of weird looks, especially from men which were really frustrating and would make me upset.

‘I got the surgery done for my own comfort and to feel happy with my body image.’

Since the surgery, Christina’s life has changed. She is now able to exercise more freely and has also lost 3st 5lbs (22kg) in body weight.

She recently shared her transformation on TikTok, where one video has received more than 400,000 views and 17,000 likes.

‘I feel a big weight lifted off my shoulders, literally,’ Christina added.

‘I feel light and free and can now wear whatever I like without looking or feeling silly.

‘It is the best money I have ever spent and it’s such an investment in my mental and physical health.’