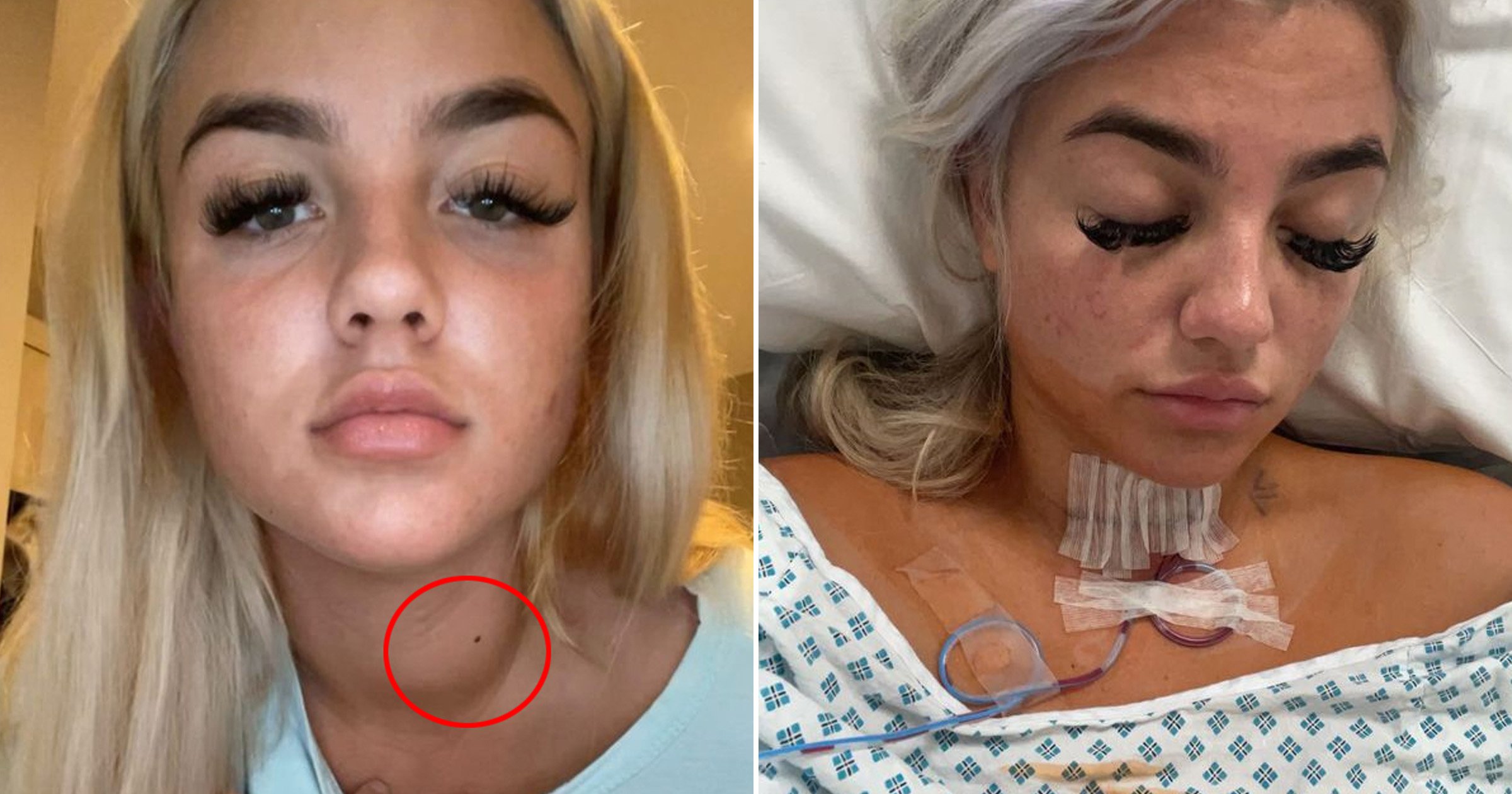 ‘It is so important to trust your gut and follow your instinct – you have to stand up for yourself when you know something isn’t right,’ says Courtney Nettleton, 21.

When the senior care assistant, from from Wakefield, West Yorkshire, told her GP she was feeling ‘uncontrollably’ tired and sleeping 14 hours a day in summer 2021, her symptoms were first dismissed as ‘teenage laziness’.

But when she began to notice more symptoms including, tiredness, breathlessness, and even suffering hot flushes, unsteadiness, neck stiffness, acne and moodiness, she knew something was wrong.

When her friends pointed out she had a lump growing on her neck in January 2022, Courtney decided to book another appointment.

‘My friends noticed a small lump on my neck at work and that combined with my symptoms pushed me to book a doctor’s appointment the next day,’ Courtney, who was then sent for an urgent ultrasound, revealed.

The ultrasound confirmed she had a tumour in her thyroid, which was then tested for cancer.

‘In February, I had a biopsy taken from the tumour and I was diagnosed with thyroid cancer,’ she recalled. ‘And doctors told me it was growing fast.’

‘I was so devastated and worried.’

‘Thyroid cancer is rare, however, I knew deep down that something wasn’t right, and being told that it was just teenage laziness by the doctors was incredibly frustrating.’

She adds: ‘Everyone knows their own bodies more than anybody else.’

In March, Courtney was sent for two separate surgeries, with both sides of her thyroid needing to be removed.

However, she says doctors made yet another mistake and claimed she was cancer free on March 22 – she wasn’t.

Just three days later, she found out that the cancer had spread to her blood vessels and required urgent surgery and radiotherapy.

‘I was so upset when I found out I still had cancer,’ Courtney shared. ‘I had to tell my family and friends that I wasn’t cancer-free and that I had more treatment to go.’

She says she felt ‘completely overlooked’ by her doctors.

‘After my first surgery, my doctor rang me and told me I was completely cancer-free and that I had nothing to worry about,’ she said.

‘My consultant rang me just three days after this to tell me that cancer cells were found in lymph channels and blood vessels within my thyroid and that I would need further surgery and radioiodine.’

So far, Courtney has had two surgeries and one round of radioiodine treatment, which left her feeling very weak and ‘lonely’.

She’ll find out whether it has been successful or not in six weeks but the wait is ‘sickening’.

‘I have the constant reassurance from Macmillan and my social worker and even though my cancer is very curable there’s always that worry that it could spread elsewhere,’ she said.

‘I suffer from severe anxiety so I am constantly worried.’

Courtney is now participating in a skydive to raise awareness and funds for Macmillan Cancer Trust and the Teenage Cancer Trust who she credits for helping her through the difficult time.

‘Although I feel very let down by doctors, the staff at Macmillan, my consultant, and Leeds St James hospital have been absolutely amazing throughout my journey,’ she added.