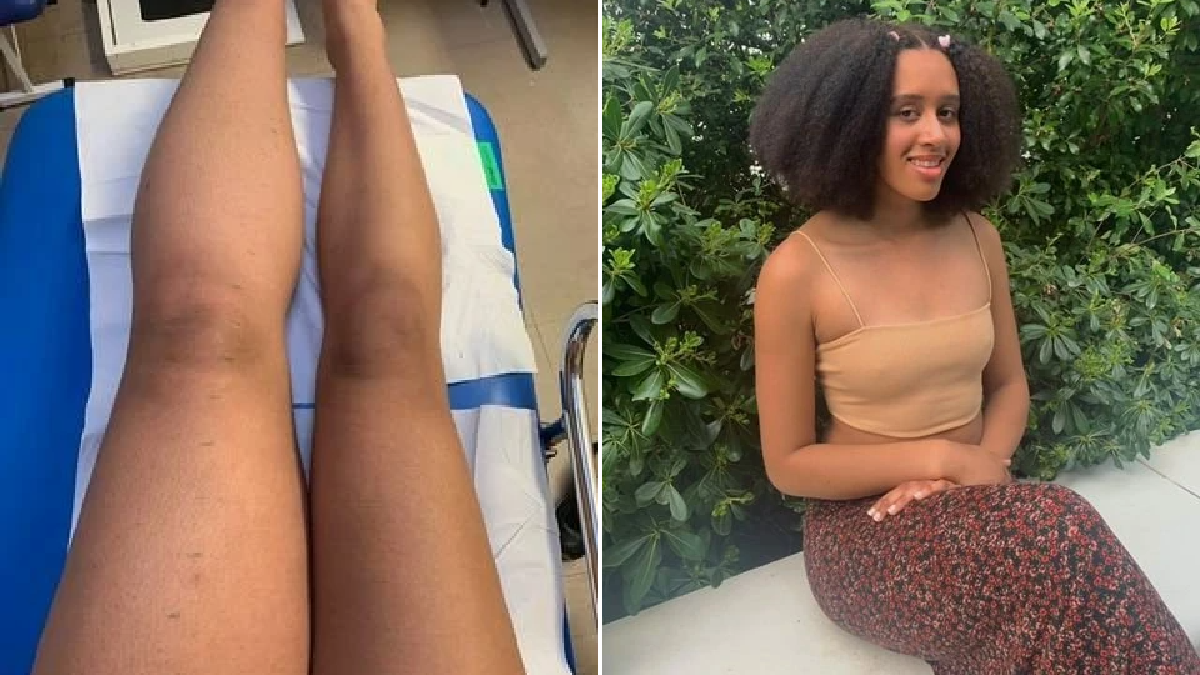 Didi Okoh lives with a rare condition, called lymphedema, where one of her legs is more than double the size of the other.

What’s more, the enlarged one can leak fluid if it gets a tiny cut.

Didi first noticed this at the age of 13, when a friend pointed out that one of her thighs ‘looked bigger than the other’ during an athletics session.

The keen athlete went to the GP but was told it was probably swelling due to exercise.

The 19-year-old law and criminology student explains: ‘It’s such a rare condition that the doctors didn’t recognise it at first.

‘I’ve always been really into sport, so we thought my muscles were just swollen.’

However, when her leg started to get painful, Didi knew it was something more.

And in July 2016, after a year of appointments, Didi was finally told she had lymphedema after visiting a consultant at Great Ormond Street Hospital in London.

Doctors also explained there are currently no surgery or specific treatment options for her type of lymphedema.

As a result, she manages the swelling by wearing high compression tights and elevating her leg.

Didi, from Essex, says: ‘It’s a progressive condition, it goes in stages.

‘If I were to have no treatment or manage the condition, it would be much worse.

‘Right now it’s one and a half times bigger than the other leg. It can sometimes reduce when I’m managing it, but it’ll never be the same size as the other leg.’

Didi says she was teased as a teen for her ‘tree trunk leg’ and has experienced rude questions and comments about what she wears – but has since learned to embrace her larger leg.

She adds: ‘It was hard when I was around 15 as my leg was getting bigger and I was self-conscious.

‘But when I turned 18 it just hit me that I can’t mope around and feel bad about it, because it’s not going anywhere. I chose then and there to just embrace it, and I feel so much more confident now.

‘I had a woman stop me in the street and tell me that I need to pray. People will often stop and stare at my legs – some will even come straight up to me and ask what’s wrong with me.

‘It’s quite rude and it used to bother me when I was younger, but now I think that people just don’t know enough about it and need educating. Rather than getting annoyed, I just explain to them that I have a condition.’

Despite experiencing some setbacks – including extreme fatigue and fluid that can leak from her larger leg – Didi is now working towards classifying as a para-athlete, with dreams of becoming a Paralympian in the future.

‘After I was diagnosed, I found it really hard to compete as I was so tired, and my swollen leg was so painful,’ she continues.

‘The coaches also wouldn’t take me on because I was a higher injury risk, and they didn’t want to be responsible for that.

‘It was a difficult time and I had to stop competing in track events and had to switch to hammer throw so there wasn’t as much impact on my legs.

‘But athletics is my passion, and I didn’t want to let my condition control my life. I try my best to just get on with things and not be defined by it.

‘Now I’m in the process of classifying to be a para-athlete – it’s been amazing to be back doing what I love.

‘It would be a dream come true to compete in the Paralympics, but more than anything I want to use my story to help others who might be struggling with their health or self-confidence.’