Olivia Newton-John died of breast cancer last week, almost exactly 30 years since she was first diagnosed, and after more than 20 years of radiant, apparently cancer-free good health. The shocking news sent a shudder down the spine of the many women like me who have breast cancer, are recovered from breast cancer or are currently dealing with a recurrence of their old foe.

Because what killed Newton-John was not the tiny breast lump that was found all those years ago, but what is called “metastatic disease”, when a cancer comes back in another part of the body. 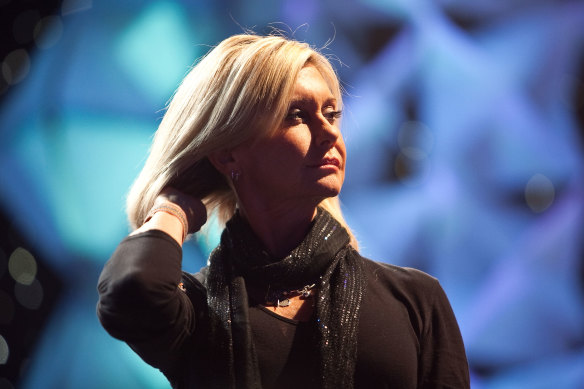 Olivia Newton-John in 2009. The beloved actress died earlier this month aged 73 after a long battle with cancer.Credit:Getty

The star was first diagnosed with breast cancer in 1992. Doctors had caught her cancer in the early stages thanks to a routine check-up. It returned in 2013. She disclosed that it had spread to her right shoulder, and it appears that she may have had treatment that successfully shrunk her tumour.

But in 2017, Newton-John revealed that the cancer had spread further, when persistent back pain turned out to be a tumour on her spine. She said, with characteristic stoicism: “It’s concerning when it comes back. But I thought, ‘I’ll get through it again’.”

Dr Rachael Natrajan, a scientist in the Breast Cancer Now Toby Robins Research Centre at The Institute of Cancer Research in London, explains: “Once cancer spreads to vital organs of your body, such as your liver, lungs and brain, it stops your body working. That’s what kills you.”

All cancers have the potential to spread, or metastasize, but what is unusual about breast cancer is how long this process can take. While most cancers spread either quickly or not at all, rogue breast cancer cells can break off from even tiny, early tumours, sneak into the bloodstream or lymphatic system and set up home in another part of the body, such as in our bone marrow. Dr Natrajan explains: “Some cancer cells escape being eradicated by treatments such as chemotherapy and “hibernate” in other parts of the body. We don’t yet know why this happens or what causes them to wake up years later. We also can’t yet accurately predict whose cancer will spread and whose won’t.”

So how can metastatic cancer be prevented or treated? One way to prevent metastatic disease is to cure breast cancer before it spreads. Improvements in treatments mean that women diagnosed with breast cancer today are half as likely to die of it as those treated 30 years ago. Today, around 80 per cent of women will be cured. However, this leaves another 20 per cent of women who will develop metastatic disease and, once this happens, their median survival is just two to three years.

Professor Nick Turner, consultant medical oncologist at the Royal Marsden NHS Trust, and professor of molecular oncology at the Institute of Cancer Research, says: “Early diagnosis of breast cancer is key to decreasing the risk of cancer spreading, as small cancers have a really excellent chance of being cured. But sadly, even if you catch it early, that doesn’t mean it can’t spread. With most cancers, if you get to five years without relapsing you are cured, but the risk from breast cancer can last for at least 20 years. This is partly because oestrogen breast cancers [which need oestrogen to enlarge] grow slowly so it can take many years to reach a point where they are detectable. But we also know this type of cell is more likely to go into this dormant stage.”

A study last year found that oestrogen-sensitive breast cancers, which account for 80 per cent of diagnoses, can come back up to 32 years after the initial diagnosis, a point at which most women would consider themselves cured.

Metastatic disease is also widely misunderstood. A US study found that 72 per cent of people believed advanced breast cancer was curable. And women with the disease often feel ignored by fundraising campaigns and stigmatised as not having taken proper care of themselves or having missed screening appointments. But when Newton-John’s cancer was first diagnosed in 1992, it couldn’t even be seen on her regular mammogram. Yet it still returned decades later.

Improvements in treatments mean that women diagnosed with breast cancer today are half as likely to die of it as those treated 30 years ago.

Scientists around the world are starting to unravel the mystery of how and why cancer cells spread, create new ways to diagnose and treat metastatic cancer earlier than ever, and maybe even prevent it. In the US, the Fred Hutchinson Cancer Center has received a new, four-year, $25 million grant from the US Department of Defence to learn, as the centre puts it, “how to kill metastatic cancer’s deadly seeds before they can sprout”.

In the UK, Prof Turner says: “There have been big advances which mean at the time of diagnosis we are better at calculating which patients are at higher risk of recurrence, and this guides treatment. In future, we are looking at blood tests known as “liquid biopsies” which can pick up tiny amounts of cancer DNA in the blood. These could be used both to reassure women at low risk and to spot the very earliest stages of relapse. Patients could then be given treatments that might defer or even prevent relapse.”

Better drugs given after surgery and chemotherapy also play a role in reducing the risk of recurrence. In April, Nice approved a new drug, Enhertu, for patients with HER2-positive metastatic breast cancer. In trials, Enhertu more than doubled survival time compared to the previous best treatment. Trials are now testing Enhertu in women with HER2-positive early breast cancer for whom immunotherapy and chemotherapy did not eradicate the disease entirely, in the hope it will prevent recurrence.

Personalised medicine is, says Natrajan, the future. “With Single Cell Sequencing, we now have the ability to look at the DNA in every single cancer cell in a tumour and look at a cellular level at why they aren’t responding to treatments.” This could enable people to move on to more effective treatments more quickly.

Labs around the world are also working on vaccines against cancer. These, says Turner, may be used in future in two ways, “firstly – and this is the most optimistic – to vaccinate healthy people so they are less likely to develop cancer; secondly, in patients who have had cancer, to enhance the immune system to clear any bits of cancer that have somehow escaped the main tumour and systemic treatment”.

However, he adds that the benefits to patients in the near future are less likely to come from “a big step” but from “small, incremental progression developing new drugs that work a little better than the previous ones. We have every reason to expect that the progress we’ve made in the last 30 years will continue.”

Turner says: “There is genuine optimism that we are understanding the genomics [DNA] of cancer better, including understanding the role the immune system plays in cancer’s resistance to treatment. In 10 years’ time, maybe 85-90 per cent of women will be cured of breast cancer.”

And the hope is that even for patients with metastatic cancer, improvements in treatment will mean it can become a chronic condition, rather than a lethal one.