I’m holding up my index finger on my left hand, while I’m cradling my mobile in my right hand and talking to the nurse in charge at Byron Bay Hospital.

I’m describing the increasingly weird symptoms I’m getting in my finger – that it’s gone from slightly bruised to purple overnight, that it’s throbbing, and also strangely yellow and swollen. I think it might have been a white-tailed spider bite because while I was folding sheets, I’d seen a thin black spider with a splash of white at its tail end, although I hadn’t felt it bite me at all, I wonder if I should come into the hospital. 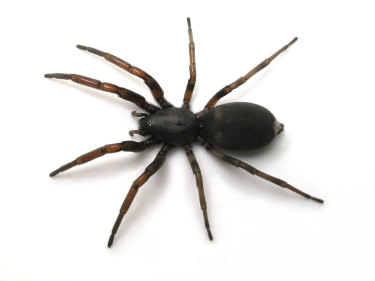 Whereupon I was given perhaps the weirdest piece of medical advice I’ve ever received – although bear in mind I do live in (or near) Byron Bay.

“Oh,” she said cheerfully, “there’s no point in coming in. It definitely sounds like a white-tailed spider bite, so you’ll need to wait until your finger turns black and the flesh is necrotic before we can do anything, then we’ll put you on antibiotics and hope for the best.”

Hope for the best? I was stunned into silence.

I thanked her for her advice, and hung up. I sat there gazing at my finger for a while. What on earth, I thought, was I going to do? I had other symptoms too. A headache, and dizziness, and if I moved a lot – and this bite happened to coincide with a house move. I felt distinctly whoozy, as if I was floating about somewhere in space, which was less than convenient.

I immediately went to Dr. Google, and my research reaffirmed that you don’t feel the bite at the time; that the symptoms come on quite a few hours later, that there will be itching, bruising and swelling to a greater or lesser degree, and possibly nausea, a headache and dizziness. Tick, tick, tick. If the spider bite didn’t clear up of its own accord, and went to the next stage, then the purple flesh might become ulcerous, and finally turn black and become necrotic – as in ‘necrotic arachnidism’ as it’s so attractively called.

Great. So I had two choices – watch and wait to see if my finger was going to die or come up with a bright idea. I thought about other cases of poison, and what you could do for them, and suddenly what popped into my mind was my grandmother’s advice that Vitamin C is great for boosting the immune system, and excellent for anything to do with nerves. So I hit the vitamin C powder (with hesperidin to be gentle on the stomach) big time, and I have to say – although this is in no way scientific – the effect was dramatic. A few hours after my third teaspoon, the swelling began to subside, the pain was less, and so was the itchiness.

Then we'll put you on antibiotics and hope for the best.

My personal observations over the next two weeks were that every time I over-exerted myself, or had to use my right-hand too much, the finger would throb and become extremely uncomfortable. I kept a light compression bandage on it, and kept up the Vitamin C, and normal operation – including typing – was resumed within two weeks.

What I did find, after doing my due diligence, is that the white-tailed spider, which is found in most of Australia and whose favourite ‘dwellings’ are rocks, leaf-litter, clothes, towels and shoes, have a reputation that (apparently) exceeds the severity of their bite. Researchers are convinced that the necrotic tissue comes from other sources, not from their bites, but people in general remain more terrified of them than even the redback apparently. My response to that, however, is that the researchers didn’t have my finger. (On a side note did you know that according to Wikipedia, Australia has ‘accidentally’ introduced several species of venomous spiders to New Zealand, including the white-tail. #notneighbourly)

To misquote Lady Bracknell, to have one white-tailed spider bite may be regarded as a misfortune, to have three looks like carelessness, but over the course of the next decade, I had two more white-tailed spider bites, both from tidying up horse rugs (also one of their favourite places to live). Each time my reaction was a little less extreme, but there, nevertheless.

‘Spider-Woman’, said my handyman off-handedly, who was there fixing a fence after my third bite, when I was still in the slightly off-the-planet stage and not being much help.

Which also reminds me of a friend’s very odd story – much worse than mine. This friend, when he was much younger, had been living in a caravan on a remote country property. He’d driven home from a party, walked around his van, only to feel what he thought was a thistle spike impale his left foot. Within half an hour, his throat had seized up, he was hallucinating, and his lungs failed, causing him to suffocate. Absolutely sure that he was about to die, he went into a three-minute coma, waking up in a patch of stinging nettles some ten feet away from the phone, to which he managed to drag himself.

One small decision, the doctors told him later, had saved his life.

The day had been intensely hot, and on the way home, stopping at a garage that had a bottle shop attached, his first thought had been to buy a six-pack of beer. Instead, he’d bought a coke. If he’d chosen the alcohol, the doctor treating him two days later said, the additional suppression on his nervous system would have tipped him over the edge and he would’ve died.

Before he went down – “like a bag of onions” – he remembers thinking that whatever had happened was nerve toxin, and that he was in big trouble. “I think I was most distressed at the idea that the feral animals would find my body, and that nobody would come near me for weeks, and all the unfinished or even unstarted creative projects, I would never achieve,” he told me.

But he lived to tell the tale, with the most extraordinary side effects being that for the next year or two – and he swears this is true – his senses were enhanced. He became ambidextrous, and he found himself suddenly able to do maths, a subject he’d always spectacularly flunked at school. Within a few years he’d painted hundreds of paintings, put out two albums, built a house and a multimedia-recording studio and completed a fantasy trilogy.

Perhaps Stan Lee and Steve Ditko’s fictional superhero wasn’t quite as fictional after all.

Editor's note: If you believe you have been bitten by a spider, seek medical attention.