When Jess’* mental health “went downhill” four years ago, the 33-year-old developed a new behaviour: she began picking her skin.

She was already suffering from anxiety and had recently been diagnosed with bipolar when she developed a sudden, intense need for her skin to be "flat". 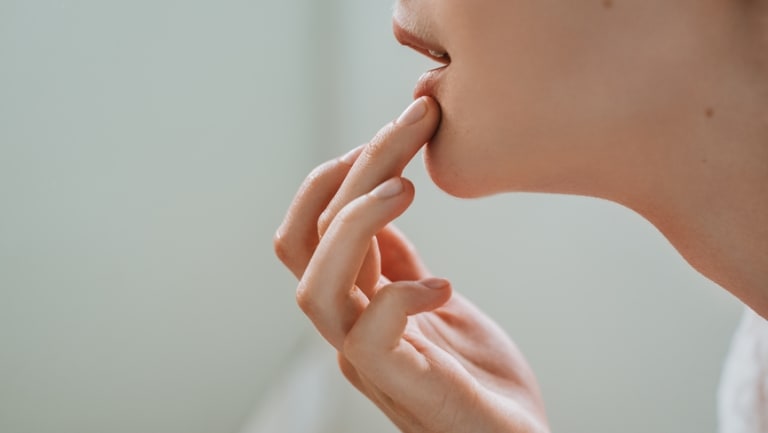 When Jess’ mental health declined, she needed to make her skin ‘flat’.

Nowadays, anything that’s raised above her usual skin’s surface – be it a pimple, skin tag, mole or even rogue hair – causes her severe anxiety.

“Once I see it or feel it… I will not rest until it’s off. I don’t care about how big the scar [will be], I’d rather the scar… My life cannot go on until it’s gone.”

When she’s "picking", Jess feels relief. But as soon as she’s finished, negative feelings flood in.

“Once I’ve picked it and my skin looks terrible and I’m bleeding, I look at myself and go, ‘You just made everything ten times worse.’”

If she’s out and feels a "lump", her anxiety builds. As soon as she gets home she races to the bathroom, to “just pick and pick and pick”.

Recently, the act of "picking" her skin hasn’t been enough to satisfy Jess’s urge; she’s now taken to using nail clippers to cut away her "blemishes".

Dermatillomania, also known as "skin-picking disorder", affects approximately 2 to 5 per cent of people at some point in their lives.

Around 75 per cent of sufferers are female, with the behaviours mainly starting in adolescence. As is the case for Jess, it often occurs in response to anxiety.

The truth is, most people engage in this kind of behaviour to some extent. It might be picking your cuticles, or popping unwanted pimples. The behaviour is only deemed problematic according to its impact on a sufferer’s life.

And that impact is sorely underestimated, says Berrick, who notes that, in severe cases, it can have “a devastating impact on virtually every aspect of the individual's life”.

There’s the physical toll, which can include scabs, wounds, scars and infection. But the more significant issue often relates to the psychological trauma.

The problem, says Berrick, is that self-inflicted behaviour is perceived as “utterly irrational” from an outsider.

“Many people naturally think, ‘Why don't you just stop it?’ or, ‘You must have no will-power’.”

Sufferers beat themselves up with the same thoughts, causing themselves even more angst, shame and embarrassment.

Jess knows those feelings all too well. After each "session" she scolds herself, wishing she would stop doing it to herself.

“The whole notion of 'will power' having anything to do with the condition is incredibly unhelpful,” Berrick notes.

Social isolation is common too, he says, as sufferers feel they have “no choice” but to socially isolate themselves out of embarrassment.

“This makes it practically impossible to have healthy relationships with friends and family, hold down a job, or participate in life in general.”

Jess understands that, but admits she uses denial as a coping strategy. She applies makeup to cover her wounds without looking in the mirror, and avoids mirrors throughout the day.

“I just pretend it’s not there."

The good news, says Berrick, is there is hope for sufferers of dermatillomania.

This type of therapy teaches people to “make room” for unwanted thoughts or urges (instead of trying to suppress or control them). There’s also a focus on aiming to replace unwanted behaviours, and remove triggers.

The goal of treatment, he explains, is to weaken pathways formed by repetitive behaviour and create new ones in their place.

“So the individual feels they have a choice about their behaviour, instead of feeling compelled to do it.”

Jess would love her compulsion to stop but hasn’t sought help for her picking, saying it pales in comparison to her other mental health symptoms.

Instead, if people question her about her skin, she tells them her eczema is flaring up, or that she’s been to the doctor to have a mole removed.

“If I actually told people it was just me [picking off my skin], I’m pretty sure it wouldn’t go down very well, or they’d think I’m crazier than I am.”